Microsoft has confirmed that it will not release a lightweight and simplified Windows 10X operating system. Microsoft said that in the current environment, people continue to rely on PCs more than ever. 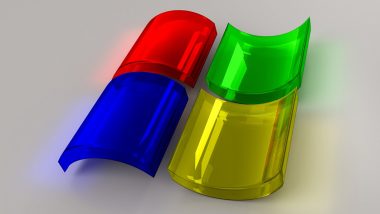 New Delhi: Microsoft has confirmed that it will not release a lightweight and simplified Windows 10X operating system. Billed as a competition to the Chrome OS, the 10X operating system was expected to come along with new dual-screen devices like the Surface Neo before the pandemic hit the world. Microsoft Azure Cloud, Teams, Office & Xbox Live Suffered Outage; Services Restored Now.

"Instead of bringing a product called Windows 10X to market in 2021 like we originally intended, we are leveraging learnings from our journey thus far and accelerating the integration of key foundational 10X technology into other parts of Windows and products at the company," said John Cable, head of Windows servicing and delivery, in a blog post on Tuesday. "This shift in thinking is an incredible example of the company's value of a growth mindset at work and exemplifies our customer-first focus," Cable said.

"As a result, we are initially taking a measured seeker-based approach to the rollout of the May 2021 Update. We are throttling availability up over the coming weeks to ensure a reliable download experience for all, so the update may not be offered to you right away," Cable informed.

The May 2021 Update is available initially to select devices running Windows 10, version 2004 or later who are interested in experiencing the latest feature updates and are ready to install this release on their device. As a first half (H1) of the calendar year release, all editions of the May 2021 Update (version 21H1) will receive 18 months of servicing and support, beginning from Tuesday, the company said.

(The above story first appeared on LatestLY on May 19, 2021 05:39 PM IST. For more news and updates on politics, world, sports, entertainment and lifestyle, log on to our website latestly.com).