Netflix Plans to Add Video Games on Its Streaming Platform 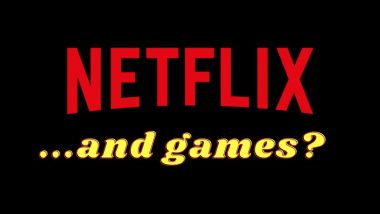 New Delhi, July 15: Netflix will soon venture into the video games industry. The streaming platform plans to offer video games on it's platform, as reported by Bloomberg. Mike Verdu, an ex-EA and Facebook executive who has worked on various popular video games including Sims, Plants vs Zombies and Star Wars, has been hired by the streaming platform to provide a push to its video gaming programme. He reportedly will be onboard Netflix as the vice president of game development. Netflix Launches Two New Kid-Friendly Features, One That Tells Parents What Their Child Is Watching via Biweekly Email.

As per reports, Netflix plans to start offering video games on its platform within next year.  The online platform however does not plan to charge extra for this service, reported Business Today. Launching gaming services on its platform, will provide Netflix an upper hand on its competitors, and will widen its product line. Apart from televisions shows, documentaries, movies, web series, the Netflix users will be able to enjoy video games as well, as and when it launches the feature. Cooking With Paris: Paris Hilton's Netflix Cooking Show to Premiere on August 4.

The global video game industry has high-growth potential and the market is also expanding. According to report by Grand View Research, the global video game market size was valued at $ 151.06 billion in 2019 and is expected to grow at a Compound Annual Growth Rate (CAGR) of 12.9% from 2020 to 2027.

Apart from this, Netflix is also launching a kid-friendly feature. According to its official website, Netflix will send bi-weekly kids recap emails to give parents a better understanding of their child’s preferences and news ways to engage those interests. It will also include printable coloring sheets and activities inspired by kid’s favorite characters, tips on how to use kids feature on Netflix among others.

(The above story first appeared on LatestLY on Jul 15, 2021 10:46 AM IST. For more news and updates on politics, world, sports, entertainment and lifestyle, log on to our website latestly.com).