Asteroid 7482, Dubbed As Potentially Hazardous by NASA Due To Its Large Size of About One-Kilometre, To Skim Past Earth on January 18

A large asteroid designated as 7482 (1994 PC1) is heading towards Earth, and will fly by the planet on January 18, 2022, according to the information shared by NASA's Center for Near Earth Studies 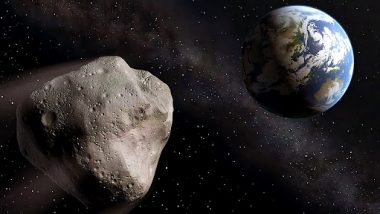 A large asteroid designated as 7482 (1994 PC1) is heading towards Earth, and will fly by the planet on January 18, 2022, according to the information shared by NASA's Center for Near Earth Studies.

It is believed to be over twice the size of the Empire State Building in New York, US, according to a report by earthsky.org. NASA’s Artemis 1 Moon Mission Delayed to March 2022 Due to Engine Issue

NASA stated that at its closest, the asteroid will be 1.93 million km from Earth, which is five times the distance between the Moon and Earth. The Jet Propulsion Laboratory, which tracks the movement of these asteroids have said that the object will be flying at 70,416 kilometers per hour.

The asteroid, which is about a kilometre in diameter has been dubbed potentially hazardous due to its size. While the asteroid will not be impacting Earth as of now, experts have said that an asteroid of this size has the potential of hitting the planet every 6,00,000 years.

As for it’s discovery, the potentially hazardous asteroid was discovered in Australia on August 9, 1994 by Robert McNaught at the Siding Spring Observatory.

According to EarthSky, the asteroid will make its closest approach to Earth on January 18, at 4:51 pm EST (January 19 at 3:21 am IST).This will be the closest approach for the asteroid for at least the next 200 years.   Is Mars Habitable? Do Aliens Exist? NASA Expert Answers Science Questions in Video Series

Asteroid 7482 (1994 PC1) is travelling at a speed of 43,754 miles per hour or 19.56 kilometres per second relative to Earth. Amateur astronomers can view the asteroid using a backyard telescope, and can spot it due to its considerable speed. Also, the asteroid will shine at a magnitude of around 10. According to EarthSky, Observers using a 6-inch or larger backyard telescope from a dark sky site can get a decent view of an object at 10th magnitude.

(The above story first appeared on LatestLY on Jan 13, 2022 03:10 PM IST. For more news and updates on politics, world, sports, entertainment and lifestyle, log on to our website latestly.com).