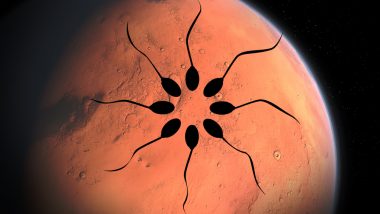 Scientists have been studying traces of any kind of life on Mars since years. Ever since the initial traces of water presence on the red planet, there have been detailed studies about Martian life. Meanwhile, there are also big plans to establish human colonies on the distant planet in future. And looks like that could be a possibility since a recent study has found that frozen sperms survive space travel. So humans can expand their genes with sperms taken from the Earth and produced on Mars. The study found that exposure to low gravity environments does not damage the viability of frozen sperm samples. Aliens Lived Underground on Mars Billions of Years Ago, Finds New Study.

The new research conducted found that sperms that are exposed to microgravity retained similar characteristics to those samples on the ground level here. The results of the study were presented at the  European Society of Human Reproduction and Embryology annual meeting in Vienna, Austria. These findings give hope to establishing human colonisation in space with the help of sperms.

The researchers studied the effects of gravity on the frozen sperm samples. The samples were frozen to avoid their exposure to radiations and affect the viability of fresh sperms. The sperms were transported on a small aerobatic training aircraft. The samples were analyzed for concentration, motility, vitality, morphology and DNA fragmentation. The findings were the same for the controlled sperms on our planet. Aliens on Mars? NASA's Mars Rover 2020 Will Identify Extra-Terrestrial Life on Red Planets Jezero Crater.

Dr Montserrat Boada from Dexeus Women's Health who presented these results this was a preliminary finding and the team would next analyze larger sperms exposed to longer periods to microgravity. In her statement, she cleared that it would be unreasonable to think of reproduction beyond the Earth as of now. She said, "If the number of space missions increases in the coming years, and are of longer duration, it is important to study the effects of long-term human exposure to space in order to face them."

Other than just the sperm quality, the question about the overall health of a human remains a concern. Because astronauts who spend the majority of time in space develop other health issues like loss of bone, atrophying muscles and blood volume loss. So there are other space travel effects on the human body that have to be countered before thinking of a reproduction system already. So developing human life on Mars is still a distant thought.

(The above story first appeared on LatestLY on Jun 25, 2019 12:35 PM IST. For more news and updates on politics, world, sports, entertainment and lifestyle, log on to our website latestly.com).