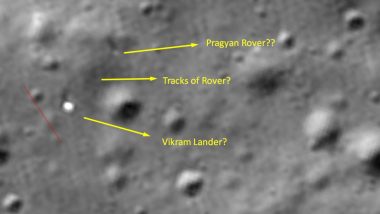 "Chandrayaan2's Pragyan  "ROVER" intact on Moon's surface & has rolled out few metres from the skeleton Vikram lander whose payloads got disintegrated due to rough landing (sic)," Shanmuga Subramanian said in one of his tweets on Saturday. "Rover has rolled out from lander & has actually travelled few metres from the surface (sic)," he claimed in another tweet, sharing pictures. He also explained why Vikram lander was invisible in November last year.

"South Pole region is not always well lit and the lander was in a shallow depth of 2 ms from the surface so it was not visible in Nov 11th's NASA flyby due to different angle of incidence & would be difficult for anyone to find it unless the sun is directly above the surface," Subramanian tweeted. 74-Wheel Truck Carrying Aerospace Autoclave Reaches VSSC in Thiruvananthapuram From Maharashtra After Travelling For Year.

Chandrayaan2's Pragyan "ROVER" intact on Moon's surface & has rolled out few metres from the skeleton Vikram lander whose payloads got disintegrated due to rough landing | More details in below tweets @isro #Chandrayaan2 #VikramLander #PragyanRover (1/4) pic.twitter.com/iKSHntsK1f

Confirming the development, ISRO chief K Sivam told TOI: "We have heard nothing from NASA so far on the matter. But yes, the person who had identified Vikram debris earlier has sent us an email about this. Our specialists are looking into the matter and we cannot say anything at this juncture." "We will have to analyse and see what may have happened. There is nothing concrete now," he added.

India's ambitious and keenly-watched lunar mission Chandrayaan 2 was expected to make its soft landing on the surface of the Moon on September 7, last year. While the whole nation waited with bated breath, the successful moon mission, Chandrayaan 2's lander Vikram lost communication with the ground stations.

(The above story first appeared on LatestLY on Aug 02, 2020 08:44 AM IST. For more news and updates on politics, world, sports, entertainment and lifestyle, log on to our website latestly.com).