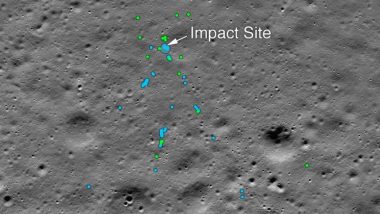 New Delhi, December 3: US space agency NASA on Tuesday tweeted saying that it has found the debris of the Vikram Lander of Chandrayaan-2. The lander had lost communication moments before making a soft landing on the moon on November 7.

The agency shared images clicked by its Lunar Reconnaissance Orbiter (LRO) camera, that show the site's changes on the moon and the impact before and after the lander made a hard landing on the surface of the moon.Chandrayaan 2: Vikram Lander Located by Orbiter, But No Communication Yet, Says ISRO.

The #Chandrayaan2 Vikram lander has been found by our @NASAMoon mission, the Lunar Reconnaissance Orbiter. See the first mosaic of the impact site https://t.co/GA3JspCNuh pic.twitter.com/jaW5a63sAf

According to the statement by NASA, "the green dots indicate spacecraft debris (confirmed or likely). Blue dots locate disturbed soil, likely where small bits of the spacecraft churned up the regolith. "S" indicates debris identified by Shanmuga Subramanian."

The mission lifted off on July 22 from the Satish Dhawan space centre, in Sriharikota. Following its launch, Chandrayaan 2 spent several weeks making its way to the moon, ultimately entering lunar orbit on August 20. On September 2, ISRO had lost communication with the lander, moments before it was scheduled to make a soft-landing on the South Pole region of the moon.

After that, constant efforts were made to establish contact with the lander, but there was no success. The location of the lander was spotted, but no communication with the vehicle was possible.

(The above story first appeared on LatestLY on Dec 03, 2019 07:34 AM IST. For more news and updates on politics, world, sports, entertainment and lifestyle, log on to our website latestly.com).