From Flying Saucer 'UFOs', Life on Venus to Galactic Federation and 'Alien' Monoliths, Year 2020 Sparked Some Crazy 'Out of This World' Happenings and Theories

Among all the seemingly unusual crisis of this year has been through, there was also a peak into the aliens and their existence. If you are keenly interested into the world of extra-terrestrials, aliens and life beyond this planet, we list out some of the interesting things from the space world in this year. 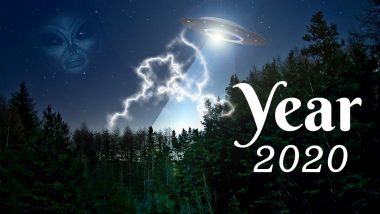 The year of 2020 is coming to an end in barely 4 days and for once people are looking forward to the new year with much anticipation. After what seemed like an apocalyptic year through natural disasters and a pandemic, people would like to get good riddance of 2020. And among all the seemingly unusual crisis of this year has been through, there was also a peak into the aliens and their existence. The most recent being the appearance of monoliths across the world, connected to aliens by many online. Some people spotted UFOs, the flying saucer ones! If you are keenly interested into the world of extra-terrestrials, aliens and life beyond this planet, we list out some of the interesting things from the space world in this year.

In the month of April, when the world was engulfed in the fear of the deadly COVID-19 spreading everywhere, aliens theories first sparked up. It was related to Pentagon's release of "unidentified aerial phenomena." There were three clips of what was described as UAP looking like UFOs taken back in November 2004. These videos were leaked numerous time, but Pentagon's release made it official of some presence outside the world.

So many people claim they see some unidentified foreign objects in the night sky and most of them turn out to meteors or edited clips. 2020 saw that too. In August, a flash of bright lights were seen in daytime in Sydney, Australia. It was said to be Elon Musk's Starlink satellite constellation launch by SpaceX. However, people believed it to be an UFO.

Similarly, in September an object in the shape of flying saucer was seen by a man in Liverpool. Some people also confirmed that they heard a loud sound and when they reached the window, they saw a green-coloured object speeding fast in the sky.

It was not revealed what exactly was this object. A similar flying saucer UFO in New Jersey turned out to be a blimp by Goodyear.

In August 2020, Russian cosmonaut Ivan Vagner shared a video which saw not one but five UFOs in the Earth's Southern Hemisphere! Vagner filmed five lights and dubbed them as "space guests." The video also captured Aurora Australis but it was the five lights that led to more speculation.

Space guests, or how I filmed the new time-lapse.

The peak of aurora borealis when passing over the Antarctic in Australia’s longitude, meaning in between them. However, in the video, you will see something else, not only the aurora. pic.twitter.com/Hdiej7IbLU

Possibility of Life on Venus

In the month of September, came a revelation of life possibility on Venus, the planet closest to the Earth! Scientists detected traces of phosphine gas in the acidic clouds of Venus. The gas is produced by microbes in oxygen starved environment. So there was a possibility to examine if there is life on Venus. People reacted with amazement, while others made jokes on alien life on a planet other than Mars.

In November 2020, a mysterious block of metal was seen in the middle of Utah desert by those keeping a watch on bighorn sheep in the region. A block of shiny monolith appearing out of nowhere got everyone talking and the mystery deepened when it disappeared! Soon, people on the internet started talking of aliens theories. The appearance and disappearance of these monoliths continues and so does the curious interest of people in the existence of aliens.

One of the most exciting "very 2020" news of this year has to be the recent revelations by former Israeli space chief of alien base on Earth. Israeli space chief general Haim Eshed termed it "Galactic Federation." He said that the extra-terrestrials are already residing on the planet earth and will reveal themselves to the humans, when people are ready! He also said that the aliens have their underground base on Mars.

Given that all we have been through in this year, people at one point seem to be ready to meet with the aliens after all. These are some of the major theories and incidents that sparked an interest into the extra-terrestrial life. What do you think about the alien life, think they are among us? Do let us know in the comments section.

(The above story first appeared on LatestLY on Dec 29, 2020 09:04 PM IST. For more news and updates on politics, world, sports, entertainment and lifestyle, log on to our website latestly.com).