What is A Monolith? Utah Monolith Location? Know The Meaning of This 'Mysterious' Geological Structure And Famous Monoliths Across Countries

A mysterious metal monolith found in Utah desert got disappeared and has been found in Romania. It was found a few metres away from an ancient landmark Petrodava Dacian Fortress in Romania. It is 13 feet tall and faces Mount Ceahlau on one side. So here we bring to you the meaning of monoliths and what they actually mean alongside some examples. 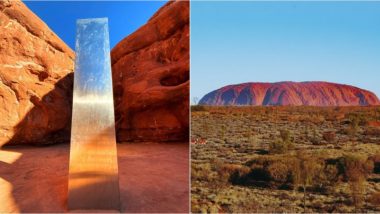 A mysterious metal monolith found in Utah desert disappeared and another metal monolith has been found in Romania - all this in the span of few days. Of course, the two mysterious occurrences have set conspiracy theorists' tongues wagging. And now, the bizarre monolith installation found in Romania has now disappeared. The triangular metallic pillar was found a few metres away from an ancient landmark Petrodava Dacian Fortress in Romania's Piatra Neamt, from where it is now missing. It is a three-sided metal structure which is 13 feet tall and faces Mount Ceahlau on one side. It is one of the seven natural wonders of Romania. Also, the monolith's disappearance has sparked alien theories on social media. But, before one jumps to the conclusion,  both the monoliths are different and not the same. As these news spreads, many social media users have become too curious to unwind the mystery while some wonder about the meaning of monoliths in the first place. Of course, there are more questions hovering their mind such as, "Utah location", "Did the Utah Monolith Disappear?", "Where Is the Utah Monolith Now?" and so on. So, here we bring to you the meaning of monoliths and what they actually mean alongside some examples.

A monolith is a geological feature of a single massive stone or rock, like mountains, a large piece of rock placed within a monument or building. Often, erosion usually exposes geological formations that are made of very hard and solid igneous or metamorphic rock. The word monolith comes from the Greek word “monolithos”, derived from mono (“one” or “single”) and lithos (“stone”).

Monoliths Around the World

Stone Mountain in Georgia, the United States stands 251 meters above its surrounding. It is the biggest monolith in the world and features a sculpture called the Confederate Memorial Carving of Confederate President Jefferson Davis, General Robert E. Lee and General Thomas J. “Stonewall” Jackson.

Granite monolith, El Capitan is a popular sight at Yosemite National Park. It stands at 910 meters vertically from Yosemite Valley.

Mount Monolith at Yukon's Tombstone Territorial Park in Canada stands steeply above Twin Lakes and is visible, along with Mount Tombstone from the Dempster Highway.

4. Uluru, or Ayers Rock in Australia

Uluru, or Ayers Rock, is a massive sandstone monolith in the Northern Territory’s arid 'Red Centre'. It is sacred to indigenous Australians and believed to have started forming around 550 million years ago.

The Utah monolith was a metallic pillar that stood in a red sandstone slot canyon in southeastern Utah. The 9.5-foot (3 m) tall structure was made of metal sheets riveted together into the shape of a triangular prism facing into a giant crack in the rock. On November 18, 2020, state biologists of the Utah Division of Wildlife Resources discovered it during a helicopter survey of wild sheep. However, a few days later, in November 2020, it disappeared. Monolith's origin as well as the identity and objectives of the person(s) who made the monolith remain a mystery.

Although officials did not disclose the object's location expecting crowds, some explorers had been able to track it down. And now the mysterious metal has disappeared after its discovery on November 18. Instagram user David Surber said he trekked to the monolith using coordinates posted on Reddit, but couldn't fin it. He wrote, "Apparently the monolith is gone."

While the Utah structure discovered recently, a Google Earth analysis reveals it has been there since 2015. However, Utah has in the past also had unusual installations in remote locations in the 1960s and '70s.

While some monoliths remain in their natural form, others have been artistically altered by nature itself over the years due to erosion and weathering. The beauty of monolith is the fact that it is carved out of a single stone

(The above story first appeared on LatestLY on Dec 01, 2020 04:02 PM IST. For more news and updates on politics, world, sports, entertainment and lifestyle, log on to our website latestly.com).