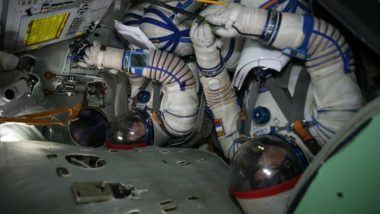 New Delhi, August 6: Four Indian astronauts, selected for India's human space mission Gaganyaan, have completed their training on crew action if the spacecraft faces abnormal landing in three different scenarios. Glavkosmos, a company that is part of the Russian State Space Corporation Roscosmos and has signed an agreement with Human Spaceflight Centre of the Indian Space Research Organisation (ISRO) for the training of Indian astronauts, has confirmed the completion of a crucial stage of the training. Gaganyaan Mission: ISRO to Set Up Its Own Satellite Communication System to Monitor and Contact Indian Astronauts in Space.

The four Indian astronauts completed the training of an abnormal landing in wooded and marshy areas in winter in February 2020, on the water surface in June 2020, and in the steppe in summer late last month (July 2020). Their training, which began at Gagarin Research & Test Cosmonaut Training Center (GCTC) in Russia on February 10, is scheduled for the first quarter of 2021. They are undergoing the training for the courses of the general space training programme and of the systems of the Soyuz MS crewed spacecraft. Gaganyaan Mission: Egg Rolls, Idli, Moong Dal Halwa for Indian Astronauts Set to Fly for India’s Maiden Manned Mission to Space; See Pics.

The 12-month training programme includes comprehensive and biomedical training, which will be combined with regular physical practices. "The programme for Indian astronauts also includes training in a centrifuge and in a hyperbaric chamber to prepare their organisms for sustaining spaceflight factors, such as G-force, hypoxia and pressure drops. These training modules are to be held in the near future," Glavkosmos said in a statement shared by Times of India.

"Their training also includes a number of courses necessary for prospective Indian cosmonauts. The regular courses comprise medical and physical training, learning Russian (as one of the main international languages of communication in space), and studying the configuration, structure and systems of the Soyuz crewed spacecraft," Glavkosmos added.

(The above story first appeared on LatestLY on Aug 06, 2020 09:36 PM IST. For more news and updates on politics, world, sports, entertainment and lifestyle, log on to our website latestly.com).