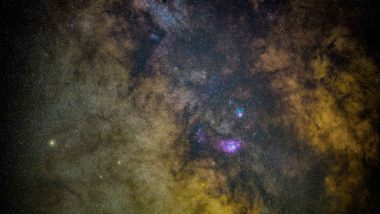 COSMOS-AzTEC-1 was first discovered with the James Clerk Maxwell Telescope in Hawaii, and later the Large Millimeter Telescope (LMT) in Mexico, found an enormous amount of carbon monoxide gas in the galaxy and revealed its hidden starburst.

But it was still difficult to figure out the nature of the cosmic gas in the galaxy.

With ALMA, the far-away galaxy was seen with unprecedented resolution, said the researchers from the National Astronomical Observatory of Japan.

They found that the galaxy has molecular clouds that are highly unstable, and leads to runaway star formation.

Usually, the inward gravity and outward pressure are balanced in the clouds.

Once this gravity overcomes pressure, the gas cloud collapses and forms stars at a rapid pace. Then, stars and supernova explosions at the end of the stellar life cycle blast out gases, which increase the outward pressure. As a result, the gravity and pressure reach a balanced state and star formation continues at a moderate pace.

In this way star formation in galaxies is self-regulating. But, in COSMOS-AzTEC-1, the pressure is far weaker than the gravity and hard to balance. Therefore this galaxy shows runaway star formation and has morphed into an unstoppable monster galaxy, the researchers explained, in the paper published in the journal Nature.

"We have found that there are two distinct large clouds several thousand light-years away from the center," Tadaki said, adding "in most distant starburst galaxies, stars are actively formed in the center. So it is surprising to find off-center clouds".

But why is the gas in COSMOS-AzTEC-1 is so unstable? Researchers do not have a definitive answer yet, but galaxy merger is a possible cause. Galaxy collision may have efficiently transported the gas into a small area and ignited intense star formation, they said.

"At this moment, we have no evidence of merger in this galaxy. By observing other similar galaxies with ALMA, we want to unveil the relation between galaxy mergers and monster galaxies," Tadaki noted.

Further, the team estimated that the gas in COSMOS-AzTEC-1 will be completely consumed in 100 million years.

Monster galaxies are thought to be the ancestors of the huge elliptical galaxies in today's Universe, therefore these findings pave the way to understand the formation and evolution of such galaxies.

(The above story first appeared on LatestLY on Aug 30, 2018 01:50 PM IST. For more news and updates on politics, world, sports, entertainment and lifestyle, log on to our website latestly.com).