The mission of NASA's Perseverance Rover will be special for those who took part in the "Send Your Name to Mars" campaign, as their names would ride aboard this rover. Names of over 10.9 million people have been stencilled on silicon chips. 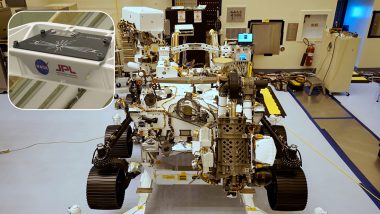 NASA will launch its Perseverance Rover to Mars this year. The mission will be special for those who took part in the "Send Your Name to Mars" campaign, as their names would ride aboard this rover. Names of over 10.9 million people have been stencilled on silicon chips. These chips were then attached to the aluminium plate on the Perseverance Mars rover at Kennedy Space Center in Florida. This rover is scheduled to launch this summer and will land at the Jezero Crater on February 18, 2021. NASA's Mars 2020 Rover Named 'Perseverance' by Alexander Mather, Seventh-Grader From Virginia.

The 'Send Your Name to Mars' campaign invited people from all over the world to submit their names. NASA received over 10,932,295 entries. Three chips the size of a finger have been attached on the anodized plate. With the use of laser etching technology, the names have been written on these chips. There are also essays of 155 finalists in the NASA's contest. NASA to Hire Astronauts to Explore Moon and Mars; Here’s How You Can Apply.

Check NASA's Tweet About Names Stenciled on Chips of Rover:

Essays from @NASA's “Name the Rover” contest, along with 10.9+ million names you sent in through the “Send Your Name to Mars” campaign, were stenciled on three chips. They’re now secured to the 2,300-pound rover. Take a look: https://t.co/zuIwYlNi1r pic.twitter.com/SeWOvFFScB

Soon as it was revealed, people who have registered in the contest took to Twitter to show off their boarding passes. Check some tweets below:

The wide outbreak of Coronavirus has not affected the launch date of this mission. On March 21, the team began reconfiguring the rover so it can ride atop the Atlas V rocket. The Perseverance rover is a robotic scientist weighing just under 2,300 pounds (1,043 kilograms). It will search for signs of past microbial life, characterize Mars' climate and geology, collect samples for a future return to Earth, and help understanding more about the exploration of the Red Planet.

(The above story first appeared on LatestLY on Mar 27, 2020 01:50 PM IST. For more news and updates on politics, world, sports, entertainment and lifestyle, log on to our website latestly.com).