The world is going to witness the last total solar eclipse of the year 2021 on December 4. The eclipse will be visible prominently in South America, Australia, South Africa, and in countries in the Southern Atlantic. Read more to know the timings, visibility, and important facts about the celestial phenomenon. 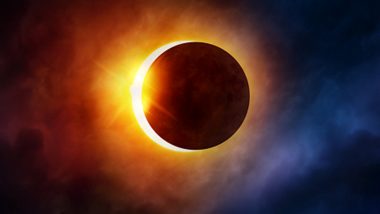 The world is going to witness the last total solar eclipse of the year on December 4. A solar eclipse or Surya Grahan occurs when the moon gets between Earth and the sun, and the moon casts a shadow over Earth. There are three kinds of solar eclipses - total, partial, and annular, along with a rare hybrid, which is a combination of an annular and a total eclipse. Exactly 15 days after the Chandra Grahan there will be this year’s second and the last Surya Grahan or solar eclipse. Usually, there are two eclipses at a stretch, but there can be three in the same season. NASA says that the cosmic phenomenon will also be visible from a few other parts of the globe.

The Moon looked red in last night's eclipse because, as Earth passed between the Moon and Sun, sunlight filtered through Earth's atmosphere, scattering the blue light and letting only red light reach the Moon.

Or as we like to call it: Atmospheric Scattering (Earth’s Version)😉 https://t.co/T8P9RRbAWE

Announcing the @cessi_iiserkol prediction for the Sun's coronal magnetic field for the 4 December 2021 Solar Eclipse. The total #SolarEclipse will be visible only over Antarctica. Excited about eclipses? See our resources for the public and scientists at: https://t.co/oSS7ExRake pic.twitter.com/YpV6QjlOH7

Which Countries Will Witness The Last Solar Eclipse?

Points To Keep In Mind During Solar Eclipse

How To Watch Solar Eclipse 2021 In India?

(The above story first appeared on LatestLY on Dec 03, 2021 02:36 PM IST. For more news and updates on politics, world, sports, entertainment and lifestyle, log on to our website latestly.com).