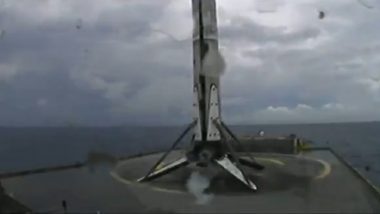 California, June 2: Elon Musk's SpaceX created history after its signature Falcon 9 rocket successfully lifted off from NASA's Kennedy Space Center carrying a Crew Dragon spacecraft with NASA astronauts Bob Behnken and Doug Hurley on board to the International Space Station (ISS). The success of the SpaceX-NASA mission marked the beginning of a new era in the US space programme. But a brief pause in SpaceX and NASA's streaming, just seconds before the Falcon 9's safe landing in the Atlantic, has triggered conspiracy theories.

After successfully sending NASA astronauts into orbit, the Falcon 9 rocket's first stage separated and flew back down to Earth, aiming for a SpaceX drone ship in the Atlantic Ocean. The Falcon 9 landed on the "Of Course I Still Love You" vessel. But SpaceX's official live streaming cut out moments before the landing and cut out to a prerecorded message instead. The streaming cut to a message reading: "Of Course I Still Love you loss of signal. The ship to shore satellite video connection has been lost. Video should automatically resume when the connection is restored."

Falcon 9 booster has landed on the Of Course I Still Love You droneship! pic.twitter.com/96Nd3vsrT2

Barely a 10-second pause sparked a frenzy of conspiracy claims on social media. One Twitter user who shared the clip online said: "The SpaceX mission is a hoax." Another person said: "FAKED AGAIN. SpaceX Falcon 9 landing on a ship was such an obvious fake. They were supposedly coming down, the right before the touchdown. THE VIDEO FEED CUT OFF, LOL. Then a minute later, it comes back on, with the rocket already down. Staged."

FAKED AGAIN. SpaceX Falcon 9 landing on ship was such an obvious fake. They where supposively coming down, the right before the touch down, THE VIDEO FEED CUT OFF, LOL. Then a minute later, it comes back on, with the rocket already down, but NO SMOKE dispersing from post landing

lol a huge part of the SpaceX launch feed cut out randomly and when it came back there was a piece of the rocket perfectly landed on the platform like they couldn't make it seem any more fake. That was great.

Am I the only one who thinks @SpaceX is fake?

Not just conspiracy theories, there are explanations too as to why the video streaming paused. According to the YouTube channel Primal Space, SpaceX's feeds often cut out before the exciting moment. The video, titled "Why does the SpaceX droneship camera cut out?", showed that the droneship was shaken when the Falcon 9 was heading towards it. The vibrations cause the ship's antenna to briefly lose contact with the transmission satellite, according to the voiceover in the video.

Who is true and who is lying? Well, there are many videos of the Falcon 9 landing in the sea and on the land that have been shot from far away. Meanwhile, the SpaceX Crew Dragon spacecraft carrying NASA astronauts Robert Behnken and Douglas Hurley successfully docked with the International Space Station (ISS).

(The above story first appeared on LatestLY on Jun 02, 2020 05:13 PM IST. For more news and updates on politics, world, sports, entertainment and lifestyle, log on to our website latestly.com).