The sound was so prominent that it was dominating any other sounds that could be recorded. The team then decided to study them in detail. 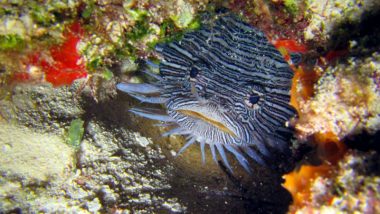 We, humans, are mostly so fascinated by just looking at the different colourful fishes that we do not pay much attention to their behaviour. But researchers have found a toadfish that sings to find and impress his lover! The fish is rather ugly and squishy looking but it makes up some grunts and boops to form a love song. Toadfishes are not commonly seen swimming around, they hide under the rocks in deep waters.

Erica Staaterman, a bioacoustician at the U.S. Bureau of Ocean Energy Management found out this weird yet interesting behaviour of the fish species underwater. She was undertaking a study to analyze the sounds underwater and encountered a toadfish making sounds. Initially, they thought it was the gear of the scuba equipment which was making the noises but later discovered the squishy fish hiding underneath some rocks. The sound was so prominent that it was dominating any other sounds that could be recorded. The team then decided to study them in detail.

"As we were going through and seeing these calls in our analysis software, we started to notice these trends that each of these individual fish seemed to be composing their call differently,” says Staaterman. Each toadfish created their own composition by vibrating his swim bladder. “Sometimes they would do one grunt and three boops, or two grunts and two boops. All of this seemed to vary across individuals,” she says. There was a distinct variety.

Check out the video of the singing toadfish:

Doesn't the singing sound more like burps? But well, that's how they impress. Researchers have also stated that the toadfish may interrupt in the middle of another male who is singing, considering him to be a rival; which is when their unique compositions come into play. A male toadfish with unique boops and grunts will anyway attract the attention of his mate. Who would have thought fishes have singing talent? Well, now you know how they make up for their slightly unappealing appearance. These fishes may look grumpy, but they are sure romantic.

(The above story first appeared on LatestLY on May 06, 2018 02:42 PM IST. For more news and updates on politics, world, sports, entertainment and lifestyle, log on to our website latestly.com).