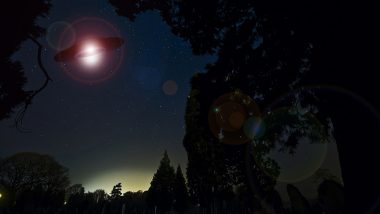 Reports of spotting mysterious objects being spotted in the sky keep coming every few days. Several researchers are working on studying the UFOs and each sighting is very important to understand about life in the outer space. Now a new sighting was reported in Ireland. The Irish Aviation Authority has got a new report about a mysterious sighting off the south-west coast of Ireland. A British Airways pilot was the one to spot a bright light and an object in the sky while on a flight on November 9. The pilot then contacted the Shannon air traffic control to know what was there any military exercises taking place around that time. But there were none so the hunt for new Unidentified Foreign Object is going on. UFO Spotted in China? Videos And Pictures of Bright Lights Spark Talks on Alien Life.

The investigations are now on the UFO-like mysterious object. The pilot reported from British Airways reported, "Ok. It was moving so fast that I couldn’t even really see it." She was flying from Montreal to Heathrow when she saw a bright object flying past, which did not particularly look like colliding into something. She was not the only one who witnessed this strange object, but another pilot from Virgin plane reported that it could have been a meteor that was entering the Earth's atmosphere. A third pilot also reported on seeing the unidentified object, also mentioning that it was going at a great speed. UFO Shaped Cloud Appears Over Moscow, Causes Frenzy Among People, Watch Video!

Following the reports of the 3 pilots, the Shannon Airport informed they would be looking into what it could have been. The Irish Aviation Authority confirmed about their investigation. They were quoted to The Examiner, "Following reports from a small number of aircraft on Friday, November 9, of unusual air activity, the IAA has filed a report. This report will be investigated under the normal confidential occurrence investigation process."

(The above story first appeared on LatestLY on Nov 13, 2018 01:03 PM IST. For more news and updates on politics, world, sports, entertainment and lifestyle, log on to our website latestly.com).