The Retail Trading Revolution — A David vs Goliath Saga

Stephen started his career in a top-tier (so-called bulge-bracket) investment bank. Having worked there for several years, he transferred to a European long-short hedge fund with a strong angle toward quantitative trading strategies. 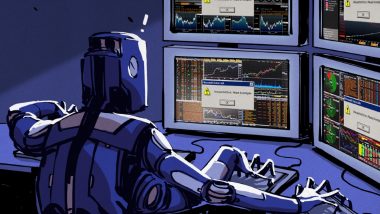 The setting of this interview is as you would expect it, given our interview partner is a finance veteran. We are sitting in a conference room in the city of finance, London.

Stephen started his career in a top-tier (so-called bulge-bracket) investment bank. Having worked there for several years, he transferred to a European long-short hedge fund with a strong angle toward quantitative trading strategies. He is still employed there while working on a new algorithmic trading company in the cryptocurrency space. Currently, he is based in Europe but does not have a fixed location of residence.

Stephen, when you started your career in finance, going into investment banking was a very different career move than it is today. What compelled you to start a career in banking?

I always had a passion for numbers. Back then, we were even pre-dot-com crash. People were naive, bonuses were high and many of my classmates were aiming for a career in investment banking. Nobody was really passionate about it. We were most passionate about the money.

Already in my first year as an IB analyst I felt that I was doing work that did not provide real-life value. Transactions were huge, often in the billions. I felt like my contribution felt very little. Additionally, transactions are very process- and people-driven. Being a nerd, I want to work with numbers that I can base my decisions on. And I want to be able to make a dent in the world. This was a passion that I developed some years into my career: I wanted to empower the average investor and normal citizen — and make money myself while doing so.

And this led to you starting your current project in the cryptography space?

More or less yes. Firstly, I started working at a quantitative hedge fund. We are applying a broad range of trading strategies but essentially, we are doing long-short plays. We also have a strong quant angle, having had quite a prominent high-frequency trading department. That was much more what I liked: Numbers, calculations, plannable profits. But one thing I did not like was the impact I was generating. Essentially hedge funds are shuffling money from poor people to rich people. It is very difficult as an average person to generate IRRs of 20+%. If you are a limited partner at a leading hedge fund, that is no problem.

Can that problem even be solved though? We have had inequality issues in this world since the beginning of civilizations.

That is true. I do not think this issue can be completely solved. It is an inherent principle of capitalism. Those who have a lot will always accrue more. But we can create mechanisms through which capital can be accrued by average/retail investors too. Our Robotrader application tries to do exactly that. And it is reassuring to have found co-founders that agree with my vision and switched sides: Having worked for major financial institutions we are now building applications for the common retail investor.

That sounds like a noble goal. Most of our readers are aware of algorithmic trading executed by firms such as Renaissance Capital — but where exactly does Robotrader fit into the picture?

Generating returns like Renaissance’s Medaillon Fund would be a dream. But we are happy if we can start generating smaller returns for retail investors first. In our strategy, we are putting reliability before profitability. Having said that, there will be iterations that will offer a different risk-return profile from our initial Robotrader release. In the spirit of decentralization, we decided to base our application (and in fact our whole organizational structure which is going to be a DAO) on a very popular blockchain called Cardano. Cardano is very concerned with decentralization, speed, privacy and constant improvement. We liked that.

And this seems to have been the right decision?

We cannot confirm that yet, but so far, our Robotrader project gets a lot of attention. Local finance media have started picking up the story. Some senior finance dudes building an NFT that does algo trading? Sounds funny. That’s how we were able to ramp up our PR efforts quickly. We are going to be releasing the first version of our Robotrader application in mid-September of 2022 to a selected part of the Cardano community. So far, the alpha version is generating steady profits. However, for us, the focus will be on determining how we can improve the product even more — and roll it out to other blockchains, too.

What is the ultimate goal?

If only I knew…We are placing a high focus on execution. We try to set realistic goals. For now, we are focused on delivering an excellent day trading bot to people who are looking to generate small but steady profits passively. If we can make these initial customers happy — I am sure we will get much more attention from the broader media (outside of established finance media) and will leverage that to onboard the next 100 million people into the DeFi space.