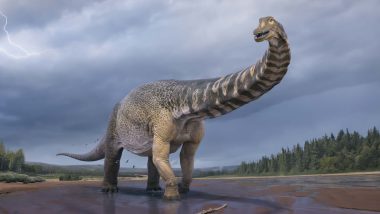 Brisbane, June 8: A gigantic dinosaur, Australotitan cooperensis or "the southern titan" discovered in Australia's outback has been identified as one of the largest dinosaurs that ever lived on the Earth. The Australotitan cooperensis is part of titanosaur family. It lived about 100 million years ago and would have been up to 6.5 metres (21ft) tall and 30 metres long.  Researchers have named it "Cooper". Dinosaur Caught Alive in Indonesia? Know the Truth About Viral Video of Triceratops Captured in East Java's Mojosemi Forest Park.

The skeleton of Australotitan cooperensis was described almost 15 years ago on a farm in Australia's southwest Queensland. "Based on the preserved limb size comparisons, this new titanosaur is estimated to be in the top five largest in the world," reported global news agency AFP quoting Robyn Mackenzie, a director of the Eromanga Natural History Museum.  The farm was located west of Brisbane in the Eromanga Basin. Fossils Of Ninjatitan Dinosaur, Member of Titanosaurs, That Lived 140 Million Years Ago Found In Neuquen City of Argentina.

Meanwhile, the skeleton was first displayed to the public in 2007. Over the past decade, paleontologists had worked to identify the dinosaur. They were trying to distinguish it from other known species by comparing scans of its bones to other sauropods, reported BBC.  Several other dinosaur skeletons have been found in the same area.

It was named "Cooper" after the nearby Cooper Creek where it was found. The process of identifying the species was lengthy as the bones were kept at a remote location and also due to size and delicate condition.  The Queensland state government welcomed the classification of the species.

(The above story first appeared on LatestLY on Jun 08, 2021 02:30 PM IST. For more news and updates on politics, world, sports, entertainment and lifestyle, log on to our website latestly.com).