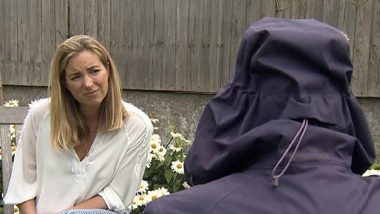 London, August 9: Over 10 days after a report aired by the British Broadcasting Corporation (BBC) drew allegations of racial insensitivity, the media house issued an apology. Lord Tony Hall, the director general of BBC, admitted the adoption of a regretful editorial decision while reporting the attack on a black health worker.

The BBC had, in a report broadcasted on July 29, used the n-word to suggest a racism angle behind the hit-n-run accident of a 21-year-old black man, who is also a musician and worker of the National Health Services (NHS), the umbrella body of publicly-funded healthcare system in the UK. Jofra Archer Hopes 12-Year-Old’s Arrest in Wilfried Zaha Racism Incident Could ‘Deter Keyboard Warriors’.

The accident was reported in Bristol. BBC social affairs correspondent Fiona Lamdin had used the racial slur during her reportage. The channel, before airing the report, had warned viewers of the racially offensive language.

Shortly after the report was aired, complaints were received from several quarters over the alleged insensitivity adopted by the channel. The BBC had initially defended its editorial decision, claiming that it was intended to highlight the charge that the attack was based on racial hatred.

Pressure mounted on the media group after BBC Radio 1Xtra DJ Sideman - real name David Whiteley - resigned from his post alleging racial insensitivity by the corporation. He called the usage of n-word as a "slap on the face" of his community.

The channel was flooded with around 18,600 complaints, along with 324 separate complaints issued to the British government over the language used by the BBC reporter. Lord Hall issued a statement today to unequivocally condemn themselves.

"The BBC now accepts that we should have taken a different approach at the time of broadcast and we are very sorry for that. We will now be strengthening our guidance on offensive language across our output. Every organisation should be able to acknowledge when it has made a mistake. We made one here," he said.

(The above story first appeared on LatestLY on Aug 09, 2020 10:20 PM IST. For more news and updates on politics, world, sports, entertainment and lifestyle, log on to our website latestly.com).