Finland Prime Minister Sanna Marin is facing flak after a tabloid reported that she had received subsidy on her family's breakfast bills while living her at official residence, Kesaranta. 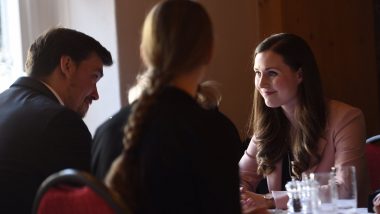 Helsinki, May 29: Finland Prime Minister Sanna Marin is facing flak after a tabloid reported that she had received subsidy on her family's breakfast bills while living her at official residence, Kesaranta. After receiving request for an investigation, the Finnish police on Friday said it will initial an inquiry to check whether PM Sanna Marin's breakfasts have been illegally subsidised using taxpayers' money. Finland PM Sanna Marin in Low-Neck Jacket For Trendi Magazine Cover Gets Criticised by Moral Police, People Trend #SupportSanna by Posting Pics in Similar Attire.

According to news agency AFP, tabloid Iltalehti reported that Marin has been claiming back about 300 euros ($365) per month for her family's breakfasts while living at Kesaranta. On Friday, police announced a pre-trial investigation. "The prime minister has been reimbursed for some meals, even though the wording of the law on ministerial remuneration does not appear to permit this," detective superintendent Teemu Jokinen said in a statement.

Police underlined that the inquiry will focus on the decisions of officials inside the prime minister's office, and "in no way relates to the prime minister or her official activities." Reacting to the development, Marin on Twitter that she welcomes the investigation. "As prime minister I have not asked for this benefit nor been involved in deciding on it," she said. Finland PM Sanna Marin Wows Fans With Tweet on Her Background, Says ‘I Am Extremely Proud of the Country’.

The Finnish Prime Minister said that she had relied on the information and guidance received from the officials and did not make personal purchases. She added that she will discontinue claiming the benefit till the inquiry is completed.

(The above story first appeared on LatestLY on May 29, 2021 01:35 PM IST. For more news and updates on politics, world, sports, entertainment and lifestyle, log on to our website latestly.com).