A native of Himachal Pradesh’s Hamirpur district was elected Member of Parliament (MP) on Saturday. Gaurav Sharma, a doctor by profession, won from Hamilton West in New Zealand Elections 2020. Sharma works as a General Practitioner in Nawton, Hamilton. 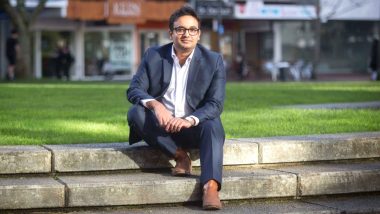 Dr Sharma defeated Tim Macindoe of the National Party by over 4,386 votes. In 2017 also he had fought general elections of New Zealand. “This is the start, because we have to make sure that we keep the promises we make, as the Opposition will hold us accountable for not fulfulling our promises,” reported The Tribune quoting 33-year-old doctor as saying. New Zealand Election Results 2020: Jacinda Ardern Scripts History! 5 Takeaways From Her Dominating Win.

Gaurav Sharma was born on July 1, 1987. He Hails from Hareta village of Hamirpur. His father Girdhar Sharma was an Executive Engineer in the state Electricity Board. However, Girdhar left the job and migrated to New Zealand when Gaurav was studying in class VII in Adhunik Public School, Dharamsala. He studied up to Class IV at DAV school. How New Zealand Defeated COVID-19: Timeline of The Kiwi Battle to Eliminate Coronavirus and Role Played by Jacinda Ardern.

Initially, the New Zealand MP’s father did not get a job in the country for almost six years. Due which family remained homeless for some time and had to sleep on benched in parks. The Auckland City Mission arranged food for them.

Gaurav Sharma studied Bachelor of Medicine and Surgery at The University of Auckland Medical School. He later pursued Master’s degree in Business Administration from The George Washington University in Washington DC.

On Saturday, Prime Minister Jacinda Arden’s Labour Party won the New Zealand General Elections 2020 with a resounding victory. Ardern scripted history with the poll results, as this was the first time in over 50 years when the Labour secured such a high vote share. This was also the first time since 1996 when New Zealand witnessed the formation of a single-party majority government.

(The above story first appeared on LatestLY on Oct 20, 2020 10:05 AM IST. For more news and updates on politics, world, sports, entertainment and lifestyle, log on to our website latestly.com).