Germany's GDP rose by 8.2 per cent in the third quarter (Q3) compared to the previous quarter amid the ongoing Covid-19 pandemic, the country's Federal Statistical Office (Destatis) said. 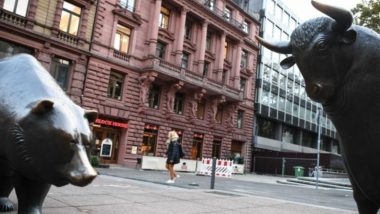 Berlin, Oct 31: Germany's GDP rose by 8.2 per cent in the third quarter (Q3) compared to the previous quarter amid the ongoing Covid-19 pandemic, the country's Federal Statistical Office (Destatis) said.

Although the German economy shrank by 4.3 per cent in Q3 year-on-year, the quarterly increase was still notable in light of the "historic slump" in the second quarter caused by the pandemic, Xinhua news agency quoted Destatis as saying on Friday.

The recovery of the economy during the summer was mainly driven by consumer spending, investments in machinery and equipment as well as a "sharp increase in exports" it added.

Following losses of more than a billion euros in the first half of the year, Germany's largest carmaker Volkswagen saw growing sales again in Europe and China and announced earnings before tax of around 2.4 billion euros by the end of Q3.

Although Volkswagen's global sales during the first three quarters of 2020 were still down 18.7 per cent year-on-year, deliveries in Q3 reached pre-crisis levels again.

German plastics manufacturer Covestro also recorded a strong increase in net income in Q3 and posted a year-on-year growth of almost 22 per cent as the company's measures in response to Covid-19 were now paying off.

Like most European countries, Germany is currently hit by the second wave of the pandemic.

On Wednesday, Chancellor Angela Merkel and the minister-presidents of the country's federal states agreed on tougher contact restrictions and a limited lockdown starting from next month.

In order to support companies whose operations were closed due to the upcoming lockdown, the government decided to provide additional economic aid to the tune of 10 billion euros.

Depending on their size, the affected companies receive up to 75 per cent of lost revenues compared to pre-crisis levels.

As part of the major Covid-19 stimulus package worth 130 billion euros that was unveiled in June, the government has already introduced quick loans for struggling companies via the state-owned development bank KfW and suspended the obligation to file for insolvency.

On Friday, Minister for Economic Affairs and Energy Peter Altmaier stressed that the economic downturn was "less drastic than initially feared" because the country had acted "jointly and decisively during the first wave of the pandemic".

Despite the renewed increase in new confirmed cases, the catching-up process of the German economy that was achieved in Q3 would continue at a very slow pace in the coming winter months, according to Altmaier's ministry.

For the full year 2020, the government projected a price-adjusted decline in GDP of 5.5 per cent before growing again by 4.4 per cent in 2021.

However, the ministry warned that the forecast depends strongly on how the infection spreads.

(The above story first appeared on LatestLY on Oct 31, 2020 04:07 PM IST. For more news and updates on politics, world, sports, entertainment and lifestyle, log on to our website latestly.com).