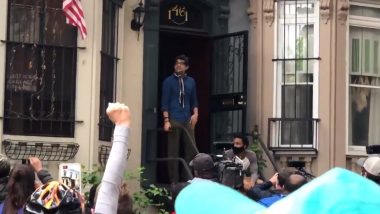 Washington, June 3: An Indian-American businessman, who opened the doors of his home here to over 70 people demonstrating against the custodial killing of George Flyod, has emerged as a hero after he rescued the strangers from the clutches of the police, fed them and made sure they were safe in his house, according to US media reports.

The death of 46-year-old African-American Floyd last week in Minneapolis has led to one of the biggest civic unrest in the history of America. Rahul Dubey, who has been living in Washington DC for the last 17 years, accommodated the large number of people in his house with some adjusting on the couch, some finding space in the rooms, while some were gratified to get rest even on the ledges of the bathtub. Black Lives Matter Protest: Powerful Photos From George Floyd Protest That Show Resistance, Anger, Despair, Hope And Love!

“There's about 75 people in my house. Some have got couch space. There's a family, a mother and daughter here, that I gave my son's room to so they get some peace and quiet. Yeah, even the ledges of the bathtub, and no one's bitching. They're happy-no, they're not happy. They're safe. They're cheering.

"They're backing each other,” Dubey, 44, told Esquire magazine in an interview on Tuesday. The day after the Monday's protests, Dubey, the owner of the Alvarez Dubey Trading Co., appeared in major news media outlets and was hailed as a saviour as those who took shelter in his house started tweeting about it.

"Rahul saved lives last night," one Black Lives Matter activist wrote on Twitter. "He ended this with an inspirational speech about not giving up and keeping up the peaceful fight. What a guy. Thank you Rahul."

“I'm at a house in DC after being pepper sprayed and knocked down by the police. There are about 100 of us in a house surrounded by cops. All the neighbours on this street opened their doors and are tending to protestors. The cops corralled us on this street and sprayed us down,” Allison Lane, one of the protestors, tweeted.

In an interview to ABC News affiliate WJLA, Dubey said that it was about 8:30 p.m. that he was sitting outside and saw police set up a brigade on 15 St. and Swann St. that turned into a holding area. People started sitting on his porch and asked if they could charge their phone and use his bathroom, he told the news channel. The protestors left his home after the curfew ended 6 am Tuesday.

“I don't think there was even a choice in what I did, to be honest. The crowd just came racing through like a tornado. ... We had to keep the door open and just kept grabbing people and pulling them in. It's the same that you would if it's a storm, and you would have let anyone into your home, I know that," he told NBC News.

He said that when the police line had finally passed his house, that's when the people stopped pouring in and "I was able to shut the door and lock it. People were pouring milk on their faces, and water was being flung around. I went downstairs to get water for people. People were coughing," he told Esquire.

Another protestor, identified as Meka, told BuzzFeed that he along with dozens of other protesters, ran into the home of Dubey on Swan Street and spent more than eight hours inside his house to avoid being arrested by Metropolitan Police Department officers.

Dubey told BuzzFeed News that it wasn't a choice to open his door and provide refuge to the mostly young protesters. “If you had seen what was going on in front of my eyes, there was no choice. People were getting pepper-sprayed and beaten and slammed to the ground,” he told the media outlet.

"I hope that my 13-year-old son grows up to be just as amazing as they are," Dubey was quoted as saying by WJLA. Writing for Esquire, Dubey said that his father came to the US as a 19-year-old with just eight dollars in his pocket.

“I looked around and saw kids from age 20 to 50 in the house scattered on all three floors and the backyard, and they were safe. They were active. They were asking questions. They were solving problems in little groups, and they are hunkered down here until 6 am. The police have tried to pull them out through trickery like five or six times,” he wrote.

“They send decoys to the door, telling them they can't leave out the front, but if they leave out the back alley, they'll be safe. I mean, bullshit stuff. They just hijacked the pizza delivery guy for an hour and wouldn't let us come through. I mean, they faked a 911 call and said 'yeah, someone called 911,' but no one did. There's a lot of emotions,” he said.

“I have a 13-year-old son, and luckily he's with friends and family up in Delaware; he's coming back tomorrow,” he wrote. “He's not there, but at the same time, I wish he was because he could see these amazing souls that are in my house are safe and they had every right to be doing what they were doing, and the police didn't have a right to just beat them down on the street. For now, at least for the next four hours or so, we're going to be safe here. I've never been so excited to get a Ducinni's pizza in my life,” Dubey said.

"It's like a covert mission to get Duccini's pizza! I'm delirious, but it's beautiful. It's absurd that I had to get some stranger to hand me pizza over my back fence through police brigade, but it also shows the human spirit, too, and that's what this is all about," he said.