A research, started by Israel's Ministry of Health, has found "probable link" between Pfizer-BioNTech's COVID-19 vaccine and heart inflammation cases. 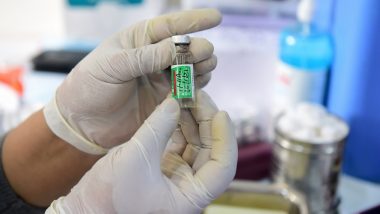 "The study found there is a probable link between receiving the second dose (of Pfizer) vaccine and the appearance of myocarditis among men aged 16 to 30," the Israeli Ministry of Health was quoted by Reuters as saying. Such a link was observed more among men aged 16 to 19 than in other age groups, it added. According to the study, most cases were mild and patients were discharged in less than a week time. Israel Issues Severe Travel Warning for Maldives, Paraguay, Chile and 7 More Nations Over High COVID-19 Morbidity.

While the Israeli Ministry of Health released the findings, it made no recommendation whether or not the vaccination should continue with Pfizer-BioNTech's jabs. However, it said a team examining the issue would make its recommendation to the ministry's director-general. The study was released ahead of a decision on vaccination of youngsters aged 12 to 15 in Israel.

Pfizer had said that it has not observed higher rate of myocarditis in Israel, emphasising that no causal link to its vaccine has been established. "We have not observed a higher rate of myocarditis than what would be expected in the general population. A causal link to the vaccine has not been established. There is no evidence at this time to conclude that myocarditis is a risk associated," the company had said.

Last month, an advisory group of the US Centers for Disease Control and Prevention had recommended further study of the possibility of a link between myocarditis and mRNA vaccines, which include those from Moderna and Pfizer.

(The above story first appeared on LatestLY on Jun 02, 2021 11:42 AM IST. For more news and updates on politics, world, sports, entertainment and lifestyle, log on to our website latestly.com).