An Israeli military statement said 60 fighter jets were sent to bomb underground tunnels belonging to Hamas in Gaza while more than 100 missiles were fired in 35 minutes early on Tuesday morning. 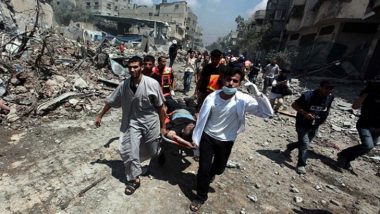 Gaza, May 19: A UN report said on Tuesday that 52,000 Palestinians took refuge at schools run by the UN Relief and Works Agency for Palestine Refugees (UNRWA) in the Gaza Strip, as a round of probably heaviest fighting between Israel and Gaza since 2014 has lasted nine days, the Palestinian news agency WAFA reported.

The UN Office for the Coordination of Humanitarian Affairs (OCHA) said in a press statement that Israeli fighter jets destroyed, either totally or partially, 448 constructions in the Palestinian coastal enclave since May 10, Xinhua reported.

Jens Laerke, a spokesman for OCHA, said in the statement that 132 buildings were completely destroyed and 316 partially destroyed, including six hospitals and nine healthcare centres. Israel-Palestine Conflict: UN Humanitarian Agency Says ‘Situation in Gaza Is Dire’.

An Israeli military statement said 60 fighter jets were sent to bomb underground tunnels belonging to Hamas in Gaza while more than 100 missiles were fired in 35 minutes early on Tuesday morning.

Meanwhile, militant groups led by Hamas fired over 100 rockets from Gaza at Israeli towns and cities, but 70 of them were intercepted, the statement added. Israel-Hamas Clash in Gaza: India Voices Support For Two State Solution At UN Security Council Meet.

According to a statement by the health ministry in Gaza, a total of 213 Palestinians, including 61 children and 36 women, were killed and 1,442 others injured in the recent Israeli air attacks on the besieged Palestinian enclave.

(The above story first appeared on LatestLY on May 19, 2021 09:21 AM IST. For more news and updates on politics, world, sports, entertainment and lifestyle, log on to our website latestly.com).