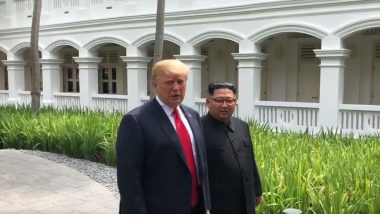 Washington, September 11: The United States President Donald Trump on Thursday claimed that North Korea's leader Kim Jong Un displayed his uncle's headless body to a senior official of the country. Donald Trump told the author of an upcoming book on the US president that Kim Jong Un confided to him about the incident. Donald Trump Offer to Meet Kim Jong Un 'Very Interesting' But No Official Request Received: North Korea.

According to the US President, Jang Song Thaek, the North Korean leader's uncle by marriage was executed in 2013 on the orders of Kim for treason and corruption. "Kim 'tells me everything. Told me everything." Reported The Washington Post quoting the US President as saying. Trump added that Kim killed his uncle and put his body in the steps. Kim Jong Un ‘In Danger’ After Surgery: Donald Trump Administration Looking for Potential Successor if North Korean Leader Dies or Is Already Dead, Says Report.

'And the head was cut, sitting on the chest,' reported AFP quoting Trump as saying . North Korea never revealed how Jang was killed. However, multiple reports revealed that an anti-aircraft gun was used to execute Kim's uncle.

After Jang's execution, his two advisers - Ri Ryong-ha and Jang Su-gil - were also killed. Before his death, Jang was the second-most powerful person in North Korea. In December 2013, Jang was abruptly accused of being a counter-revolutionary and was stripped of all his posts and expelled from the Workers' Party of Korea (WPK). On December 13, North Korea state media announced he had been executed.

(The above story first appeared on LatestLY on Sep 11, 2020 05:17 PM IST. For more news and updates on politics, world, sports, entertainment and lifestyle, log on to our website latestly.com).