Pakistan Prime Minister Imran Khan has postponed his address to the nation as he discusses the "foreign threat" letter with journalists and military leadership while ministers ruled out the possibility of him stepping down before a vote of no-confidence, media reports said. 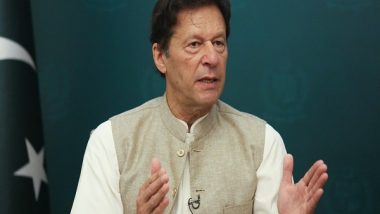 Islamabad, March 30: Pakistan Prime Minister Imran Khan has postponed his address to the nation as he discusses the "foreign threat" letter with journalists and military leadership while ministers ruled out the possibility of him stepping down before a vote of no-confidence, media reports said.

He rejected the notion that someone had instructed Imran Khan to postpone the address. Meanwhile, the military leadership is expected to call on Imran Khan any time soon. The PM will likely hold a meeting of the National Security Committee to discuss the letter allegedly containing a foreign threat and received by the PTI government, Samaa TV said.

At a public rally in Islamabad's Parade Ground on Sunday, the Prime Minister claimed that his government had received a "written threat" from outside the country and it was an evidence of a foreign-funded conspiracy against the PTI rule.

The letter was sent by Pakistan Ambassador to the US, Asad Majeed Khan after his meeting with the US Secretary of State. Other reports also claim that the letter was not written by a foreign government but by an Ambassador and contained assessment of bilateral relations between Pakistan and a western country.

Journalist Imran Riaz Khan said that the letter hasn't been shown to journalists but the contents of the letter have been revealed. "It is a conversation between two officials of Pakistan and the other country, as per my understanding it is the US. The government, however, hasn't named the country, neither have they shared the number of officials or the meeting venue," he said.

"They didn't show us the letter as they are bound not to share the details under the law," he said. Imran Riaz Khan said that journalists were told that the language used in the letter was "arrogant and threatening".

It is a document that tells that Americans have threatened that if the no-confidence motion against Imran Khan fails, there would be consequences and if it wins, the US would forgive Pakistan's mistakes, he said, Samaa TV reported.

There are a few issues in the letter like Pakistan's stance on the Russia-Ukraine conflict as it was said that Imran Khan decided on his own to visit Moscow, he said adding that the Prime Minister was criticised for his trip to Russia.

About former PM Nawaz Sharif's involvement in the episode, the journalists were told that opposition held meetings in the west and they created the impression that Imran Khan is anti-US. The letter was also been discussed at an emergency meeting of the federal cabinet on Wednesday.

(The above story first appeared on LatestLY on Mar 30, 2022 09:35 PM IST. For more news and updates on politics, world, sports, entertainment and lifestyle, log on to our website latestly.com).