Pakistan 'Spewing Venom, Needs to Reflect There Are No Takers of Its False Rhetoric': India at UN 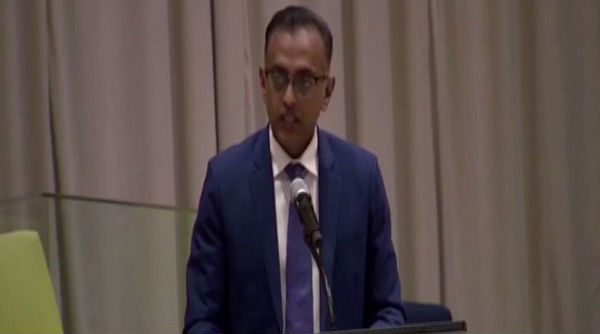 New York, January 23: India has lambasted Pakistan for "spewing venom and false narratives" of monumental proportions in the United Nations and said Islamabad takes to hate speech like fish takes to water and "obfuscates" the international community from the truth.

As Pakistan raked up its attacks against New Delhi on Kashmir issue, India's Deputy Permanent Representative at the United Nations, Ambassador K. Nagaraj Naidu, speaking at a session of the General Assembly on ''Report of the Secretary-General on the Work of the Organization'' on Wednesday, said that Pakistan needs to reflect that there are no takers for its false rhetoric and it should get down to the normal business of diplomacy. Pakistan PM Imran Khan Mum Over Uighurs Muslims Issue, Says China is a 'Good Friend'.

Naidu said Pakistan "indulges in confabulations and obfuscates the international community from the truth" instead of putting an end to the "bellicose and vitriolic diatribe" and taking steps to restore normal ties. "Just like a fish takes to water, one delegation has again taken to hate speech. Every time this delegation speaks, it spews venom and false narratives of monumental proportions."

"It''s extremely surprising that a country that has completely decimated its minority population talks about protecting minorities. Pakistan's practice of using false pretenses to distract from addressing the malaise that afflicts it has run its course. Pakistan needs to reflect that there are no takers for its false rhetoric and should get down to the normal business of diplomacy," Naidu said. Donald Trump Again Offers to 'Help' Resolve Kashmir Issue, Meets Pakistan PM Imran Imran Khan in Davos.

Pakistan with the help of China has tried to raise the matter of abrogation of Article 370 in the United Nations multiple times. Early this month, China and Pakistan managed to hold an informal closed-door consultation on Kashmir in the UNSC in New York more than five months after India revoked the special status of Jammu and Kashmir granted under Article 370 of the Constitution in August. However, the overwhelming majority of the UNSC was of the view that it was not the right forum for such issues.