At least eight people reportedly were killed in Russia's Perm State University on Monday after a gunman opened fire at the premises of the university., Twenty-four people were also reportedly injured in the attack. 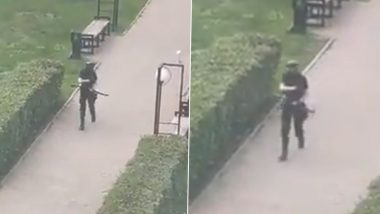 Moscow, September 20: At least eight people reportedly were killed in Russia's Perm State University on Monday after a gunman opened fire at the premises of the university., Twenty-four people were also reportedly injured in the attack. As per the Russian Health Ministry. Twenty-five medical teams are currently working at the site. The assailant has been arrested. However, the Russian authorities are yet to disclose his identity. Russia Shooting: 8 Killed After Gunman Opens Fire at Perm State University in Moscow.

As per reports, the gunman used a "traumatic" firearm. These guns are designed to fire non-lethal rubber or plastic projectiles but can be modified to fire other ammunition. Students and staff of the university locked themselves in rooms. The university authorities urged those who could leave the campus to do so. Russian President expressed condolences to bereaved families.

"The President conveys deep condolences to those who lost their relatives and friends as a result of this tragedy," a Kremlin spokesman said. The Indian Embassy in Russia also expressed shock over the shooting incident. The embassy conveyed deep condolences for the loss of lives in the shooting. Notably, all Indian studnets studying in the university are reportedly to be safe.

Embassy is in touch with local authorities and representatives of Indian students. All Indian students at Perm State Medical University are safe. (2/2)@PMOIndia @narendramodi @DrSJaishankar @MEAIndia

Several students even jumped out the windows of classrooms. Several videos of students throwing belongings out of windows from buildings on campus before jumping to flee the shooter are circulating on social media. One of the university's professors, Ivan Pechishchev, told the BBC he saw students running from a building and people jumping out of the second floor as he went to class.

Here Are Videos of People Jumping Out Of The Windows of Classrooms:

Atleast 8 people killed in shooting incident at #Perm state university in #Russia attacker can be seen with a shotgun pic.twitter.com/kAvVr69LZL

reports of another school shooting in Russia; this time at Perm State University. Russian agencies say there are casualties. pic.twitter.com/jkeyGDLO05

The Perm State University, one of the oldest in the Urals, is located around 1,300 km east of the capital, Moscow. It is the second incident of shooting in Russia. Earlier this year, a 19-year-old gunman opened fire in his old school in the central Russian city of Kazan. Nine people were reportedly killed in that attack.

(The above story first appeared on LatestLY on Sep 20, 2021 05:30 PM IST. For more news and updates on politics, world, sports, entertainment and lifestyle, log on to our website latestly.com).