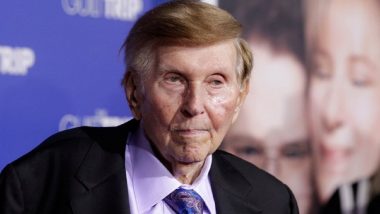 Los Angeles, August 12: Sumner Redstone, a tycoon of American entertainment industry, died after battling brief illness at the age of 97. A company issued by his company National Amusement confirmed that he breathed his last at his Los Angeles-based residence on August 11.

Redstone, considered as the topmost media moguls in the US, is considered to have cast the biggest influence on the modern American media industry. The parent company he headed includes Viacom, Paramount Pictures, CBS Corp, MTV, Comedy Central and Nickelodeon -- which are among the most visited platforms by viewers in the United States.

Redstone, a businessman of Boston, had presided over the drive-in theater company run by his father. He developed the same into a multiplex cinema hall -- which is considered as the saviour of theatre business in the 1960s.

"With his passing, the media industry he loved so dearly loses one of its great champions. Sumner, a loving father, grandfather and great-grandfather, will be greatly missed by his family who take comfort knowing that his legacy will live on for generations to come," said the statement issued by National Amusement on his demise.

The twilight of Redstone's life was marred with legal suits filed by his family members over business stakes and allegations levelled by his former girlfriends. Due to age-related ailments, his presence in public life was severely restricted over the past couple of years.

(The above story first appeared on LatestLY on Aug 12, 2020 06:58 PM IST. For more news and updates on politics, world, sports, entertainment and lifestyle, log on to our website latestly.com).