The bill is debated for a long time now as critics say it will secede a part of their land to Montenegro. For Kosovo, it is a crucial step for their integration with the European Union. 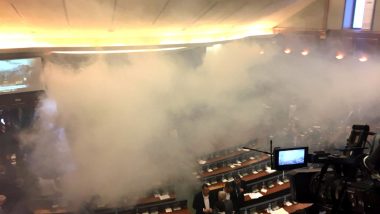 In one of the shocking incidents, the Parliament of Kosovo saw tear-gas canisters being fired. In a Parliamentary session, where ratification of a border agreement with neighbouring country Montenegro was in process, the opposition party law-makers tried to thwart the process resorting to such unusual tactic.

According to the deputy chief of staff to Speaker Kadri Veseli, Avni Bytyci said that the canister was released by opposition party Levizja Vetvendosje. Bytyci also said that the party had resorted to the same manner while preventing the voting previously too.

Bytyci added that the ratification of the border is crucial for the citizens of Kosovo. If the ratification is a done deal then the citizens will be able to travel without a visa to the European Union. Kosovo’s neighbouring countries Serbia, Albania, Montenegro, and Bosnia amongst others already have a visa-free passage in the European since 2010.

The video went viral on social media in no time. The video showed how the parliamentarians were left teary-eyed and were seen wiping their noses as they tried to brave the gas in the Parliament chamber.

Watch video of Tear Gas Canister being fired in the Parliament in Pristina, Kosovo:

Another video shows lawmakers rushing out of the Parliament Chamber:

MORE: Aftermath of tear gas attack inside the Parliament of Kosovo. Members of Parliament visibly affected by the tear gas, while evacuating the Assembly chamber. #Kosovo pic.twitter.com/4rIROEWIqw

According to the police reports, several legislators from the ultra-nationalist Self-determination party were detained. The bill is debated for a long time now as critics say it will secede a part of their land to Montenegro. For Kosovo, it is a crucial step for their integration with the European Union.

However, the voting went ahead in the House despite attempts to disrupt it by throwing tear gas. Of the 120 MPs in the chamber, 80 MPs backed the bill.

(The above story first appeared on LatestLY on Mar 23, 2018 05:49 AM IST. For more news and updates on politics, world, sports, entertainment and lifestyle, log on to our website latestly.com).