UK Prime Minister Boris Johnson has unveiled a new three-level Covid-19 alert system that will be implemented across England, with the levels being decided according to the infection rates. 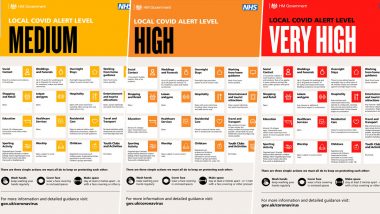 London, Oct 13: UK Prime Minister Boris Johnson has unveiled a new three-level Covid-19 alert system that will be implemented across England, with the levels being decided according to the infection rates.

"We must act to save lives," Xinhua news agency quoted Johnson as saying while addressing while the House of Commons, or the Lower House of Parliament, on Monday evening.

"We cannot let the virus rip."

We are introducing a three tiered system of local COVID Alert Levels in England.

[Tap to expand the graphics]

For more information and to find out which alert level applies in your area go to: https://t.co/G7nva4OUE1 pic.twitter.com/JP6gv7YHiz

The current set of rules are "complex to understand and enforce", he said, so the new system is designed to "simplify and standardize" the curbs. COVID-19 Vaccine Update: Johnson & Johnson Pauses Vaccine Trial After Volunteer Falls Ill. (Photo Credits:

"Medium" includes the current restrictions already in place, including the Rule of Six and the 10 hospitality curfew, Johnson said.

Most areas currently under local restrictions will "automatically" enter this level, he said.

"High" level reflects the local lockdown rules that are in place in parts of England currently, which primarily prevents people from socializing with other households indoors, but the so-called "support bubbles" will still be permitted.

"Very High" level is for places where "transmission rates are rising most rapidly" and the National Health Service (NHS) "could soon be under unbearable pressure".

This level will see venues such as bars and pubs closed unless they can operate as restaurants, while people are also banned from socializing with other households both indoors and in private gardens, with local residents being advised against travelling in and out of these areas.

The Liverpool City Region will be placed in the "very high" level from Wednesday, the Prime Minister said, adding that following talks with local leaders, gyms, leisure centres, betting shops and casinos will also close in the region.

Johnson added that the number of confirmed cases had quadrupled over the past three weeks and there were more people in hospital now with the virus than when the country went into lockdown in March.

Meanwhile, further restrictions for London may be announced within days as the number of coronavirus cases in the city hit more than 7,700 a week.

Explaining the government's move, Johnson said that this is "not how we want to live our lives", but is "the narrow path we have to tread between social and economic costs of a full lockdown and the massive human and indeed economic cost of an uncontained epidemic".

For those who will be affected by the new measures, Johnson also set out relevant financial support plans.

For example, the government will provide about 1 billion pounds of new funding to local authorities across the UK on top of the 3.6 billion-pound Towns Fund.

(The above story first appeared on LatestLY on Oct 13, 2020 10:11 AM IST. For more news and updates on politics, world, sports, entertainment and lifestyle, log on to our website latestly.com).