In the UK, the second wave of the coronavirus was started by young people and it seems very likely that in India too, youngsters, who have been infected with the new strains of the virus, are spreading to more than one person, said Zhengming Chen, Professor of Epidemiology, Nuffield Department of Population Health, University of Oxford. 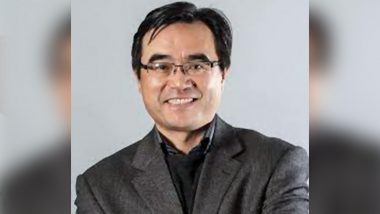 New Delhi, April 4: In the UK, the second wave of the coronavirus was started by young people and it seems very likely that in India too, youngsters, who have been infected with the new strains of the virus, are spreading to more than one person, said Zhengming Chen, Professor of Epidemiology, Nuffield Department of Population Health, University of Oxford.

Chen added that in the UK, a high proportion of patients have long Covid-19, but reasons for this phenomenon is not clear so far. COVID-19 Vaccination: 7 Blood Clot Deaths in UK After AstraZeneca Jab.

Excerpts from the interview:

Q) Experts say young people may be behind the increase in cases. Is it possible that young people, who have contracted the new strains of coronavirus are spreading it to more than one person, leading to a spike in cases?

Response: Yes, very likely. In the UK, the second wave started with young people through social mixing and returning to school.

Q) Is there a possibility that a second wave may not lead to increase in fatality or increase in a Covid patient's admission to Intensive Care Unit (ICU), however the viral infection may have a long-lasting health impact in patients, for example, kidney, live or lungs damage?

Response: Very unlikely but the fatality rates may be somewhat lower for a number of reasons, such as better treatment and clinical management of patients, younger age of the newly infected individuals. On the other hand, if the health system is overwhelmed, then the picture may be different, as now seen in Brazil. In the UK, a high proportion of the patients have long Covid, ie experiencing various symptoms many months after discharge from hospital. The reasons for this phenomenon are not clear and are subject of new research.

Q) Usually, experts say human behaviour is considered major factor linked with spike in coronavirus cases. But some experts also point at a probability of a new strain, possibly behind the second wave, which maybe infectious, not fatal, leading to surge in cases in many places in India?

Response: In the UK, the second wave is related strongly with emergence of the new Kent strain, which is now sweeping through Europe. On the other hand, human behaviour always plays an important role. For example, the UK went down to lockdown in early January and while the number of cases has decreased steadily from 60,000 a day to 5,000 a day over the last three months, the speed of reduction appears to have levelled off recently due to perhaps lockdown fatigue and poor compliance of population with the roles.

Q) India is amid a second wave of the pandemic. The rise in cases is too steep, sharper than the first wave. Is it consistent with the pattern seen in other virus pandemics?

Response: Several other countries in Europe and South America have experienced the similar situation, partly due to new variants which are 50-70 per cent more transmissible and partly due to lockdown fatigue of the population. This may also apply to India and I have noticed recently there were several big festivals in India that attracted big crowds.

Q) The US and Europe have already faced the second wave, is there any learning for India from the western countries?

Response: I think the only way out is through vaccination and I hope the process in India can be expedited.

Q) Experts say that seasonal change has no effect on coronavirus. There were some locations, for example Delhi (at the onset of winter season), which saw a high number of coronavirus infections early on, followed by a decline (December-January), is having a "second wave" of increased cases, at the beginning of summer season in March.

Response: Seasonal changes certainly have a role for they affect people's activities and behaviours. However, many other things are involved at the same time (emergence of new variants, time of lockdown) so it can be difficult to figure out the relevance of seasonal changes specifically. For example, in many parts of the EU, the cases are rising now while we are coming out the winter season, which is believed to be attributed chiefly to the U.K. B117 variant that become dominant and much difficult to control effectively.

(The above story first appeared on LatestLY on Apr 04, 2021 01:49 PM IST. For more news and updates on politics, world, sports, entertainment and lifestyle, log on to our website latestly.com).