US Senate Elections 2020: How Numbers Are Stacked Up? Can Democrats Gain Control of Upper Chamber of Congress?

The 33 seats under Class 2 are due for polls in the current elections, along with the seats of Arizona and Georgia which fell vacant after the death of Senator John McCain in 2018 and resignation of Senator Johnny Isakson in 2019, respectively. 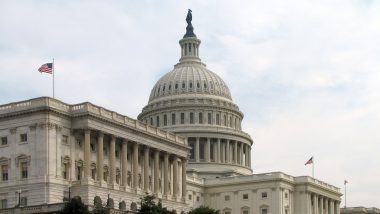 File image of the US Capitol | (Photo Credits: WIkimedia Commons)

Washington, October 19: The Senate 2020 elections are considered as equally crucial to map the future of American politics, as the November 3 presidential clash between Donald Trump and Joe Biden. The party controlling the Upper Chamber of Congress holds the edge in thwarting orders issued by the President that are "unilateral", or blocking legislations and motions moved by the House of Representatives - the lower chamber of Congress.

The 100-member Senate is not reconstituted via a single election. Instead, the polls are considered biennially, with one-third of the seats going to polls at every two years. The three sets of 33 seats each are categorised as "Class 1", "Class 2" and "Class 3". US Senate Elections 2020: Polling Date, Number of Seats in Fray, Last Results and What's at Stake – All You Need to Know.

The 33 seats under Class 2 are due for polls in the current elections, along with the seats of Arizona and Georgia which fell vacant after the death of Senator John McCain in 2018 and resignation of Senator Johnny Isakson in 2019, respectively.

How Numbers Are Currently Stacked Up in The US Senate?

Republicans control the Upper Chamber of Congress, largely due to the spree of victories in the 2014 and 2016 polls. A change in electoral sentiment was on cards since 2018, when Democrats succeeded in winning majority of the 33 Class 1 seats. Ahead of the current elections, the 100-member Senate included 53 GOP members and 45 Democrats. Two Independents, one of them being Vermont Senator Bernie Sanders, largely vote for the Democratic Party on key legislations and issues.

Can Democrats Gain Control of Senate?

The incumbency factor is running against the Republicans. Out of the 35 seats going to polls, 23 are held by the GOP Senators, whereas, 12 are represented by the Democratic Party leaders. The major pre-poll surveys have indicated that following the elections, the Democratic Party would near the majority mark, whereas, the Republicans would trail by at least six seats.

According to the non-partisan Cook Political Report, eight of the poll-bound seats currently held by Republicans are leaning towards the Democrats. On the contrary, only one Democratic Party seat is predicted to be wrested by the Republicans.

Democrats to Surge Ahead of Republicans: Poll Tracker Click the map to create your own at 270toWin.com

As per the 270toWin Ratings Agency forecast, which compiles and processes data from several research groups including Sabato's Crystal Ball, The Cook Political Report, and Inside Elections, the Senate would comprise of 49 Democratic members, 43 Republicans and two Independents after the November 3 elections.

In 2014, when the Class 2 seats were contested, Republicans ended up winning 21 out of 33 seats. In 2016, when 33 seats of Class 3 were contested, the Republicans again gained an upper hand with 20 of its candidates emerging victorious. The Democrats managed to win 12 seats, whereas, one Independent Senator succeeded in retaining his seat.

In 2018, the Democrats finally improved their scores in the Senate elections. Out of the 33 Class 1 seats contested, the blue party scored a victory in 21. The Republicans were restricted in 10 seats. If the trend holds on, then Democrats are poised to reverse the majority status in the Upper Chamber of Congress.

(The above story first appeared on LatestLY on Oct 19, 2020 07:37 PM IST. For more news and updates on politics, world, sports, entertainment and lifestyle, log on to our website latestly.com).