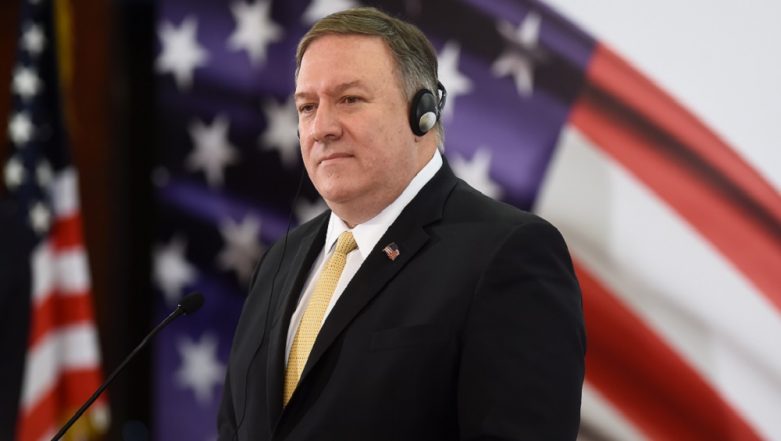 Washington, April 30: US Secretary of State Mike Pompeo said that the US would seek to stabilise global oil market after Washington's decision not to extend sanctions waivers for Iran oil purchase. "We are convinced we can make sure the markets are adequately supplied. We are continuing to work on that," Xinhua quoted Pompeo as saying to the audience during an event by The Hill news outlet on Monday.

The US would cooperate with other alternative suppliers home and abroad on the matter, he added. The Trump administration announced on April 22 that the US sanctions would be reimposed on all countries that import Iranian oil since May 2, leading to turbulence in global oil markets. US President Donald Trump urged the Organization of the Petroleum Exporting Countries (OPEC) and top oil supplier Saudi Arabia to lower oil price on Friday. US Secretary of State Mike Pompeo Apprised of IAF Raid in Pakistan's Balakot: Sushma Swaraj at All Party Meeting.

"Gasoline prices are coming down. I called up OPEC, I said you've got to bring them down. You've got to bring them down," Trump told reporters Friday en route to an event in Indianapolis, according to local media. Analysts noted that Trump's previous effort to push gasoline prices down had been followed by fresh price highs, according to a Reuters report.

Washington in November snapped back sanctions on Tehran's banking, energy and shipping industries while granting 180-day waivers to eight of Iran's major oil buyers in order to stabilise the global energy market.

Comments
Tags:
Donald Trump Mike Pompeo US president US Secretary of State
Comments
You might also like