Belarus Foreign Minister Vladimir Makei was poisoned in a Kremlin sting operation, extraordinary new reports have claimed, according to a media report. 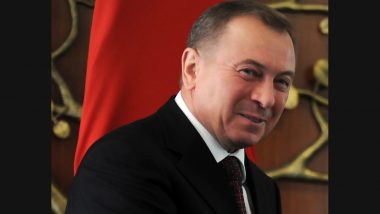 The veteran diplomat and former spy died suddenly on Sunday amid claims that he was in secret contact with the West concerning the war in Ukraine and preventing Belarus from being incorporated into Russia by Vladimir Putin, Daily Mail reported. Vladimir Makei Dies: Belarus Foreign Minister Passes Away at 64; President Alexander Lukashenko Expresses Grief.

A video shows Makei, 64, looking healthy on a Belarus military cargo plane last week shortly before he died. He wasn't known to suffer from any chronic illness.

Some reports say he had a heart attack and that his death has 'shaken' president Alexander Lukashenko, who now fears for his own safety, Daily Mail reported.

Lukashenko has even replaced his cooks and servants, fearing assassination by Moscow, it is claimed.

He cited sources "close to the Russian special services", claiming: "The clinical picture in such cases corresponds to death from stroke or heart failure."

Nevzlin claimed that the poisoning theory is supported by the fact that the 64-year-old official had no health problems, was leading an active lifestyle and was making plans.

"When he suddenly got a heart condition, he did not go to doctors as he had not experienced such problems before and did not give any importance to the pain," Nevzlin said.

(The above story first appeared on LatestLY on Nov 28, 2022 07:02 PM IST. For more news and updates on politics, world, sports, entertainment and lifestyle, log on to our website latestly.com).