Afghan President Ashraf Ghani on Tuesday signed a much-awaited decree that would facilitate the release of the Taliban prisoners. 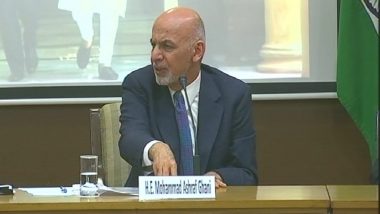 Kabul, March 11: Afghan President Ashraf Ghani on Tuesday signed a much-awaited decree that would facilitate the release of the Taliban prisoners. The release of prisoners was a part of a peace deal signed by the United States and the Taliban last month. Making the announcement about the decree, Ghani's spokesperson Sediq Sediqqi on Tuesday said that details will be shared on Wednesday.

"President Ghani has signed the decree that would facilitate the release of the Taliban prisoners in accordance with an accepted framework for the start of negotiation between the Taliban and the Afghan government. Details of the decree will be shared tomorrow," tweeted Sediqqi. This comes a day after Ghani took oath as the president of Afghanistan. US, Taliban Sign Historic 'Peace Deal' to Bring Normalcy in Afghanistan; Mike Pompeo Says Afghan Soil 'Will Never be Used as Terror Base'.

The president had previously rejected the Taliban demand for its fighters to be released. The announcement will give an impetus to save the deal which witnessed the shakedown as the Taliban have launched several attacks on the Afghan forces. On February 29, the United States and the Taliban had signed a long-awaited peace deal in Qatar that sets the beginning of talks for March 10, provided that up to 5,000 Taliban prisoners are released from jail by that time.