Get latest articles and stories on Entertainment at LatestLY. Gal Gadot got a COVID-19 test done before heading back to the shooting sets of her upcoming movie 'Red Notice'. 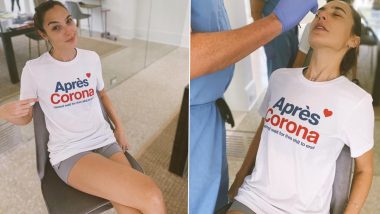 Gal Gadot got a COVID-19 test done before heading back to the shooting sets of her upcoming movie 'Red Notice'. The 'Wonder Woman' actor shared two pictures of herself getting tested for the novel coronavirus on Twitter during the early hours of Thursday. Alongside the pictures, the star stated that she is "getting ready to head back to the 'Red Notice' set but the preparation looks a little different now". Wonder Woman 1984 Trailer: From Cheetah’s Look to Maxwell Lord’s ‘Monkey’s Paw’, 5 Important Plot ‘Reveals’ From Gal Gadot’s Superhero Film We Can’t Miss!

She also added the hashtag of 'Stay Safe' in her tweet. Gadot's upcoming Netflix movie 'Red Notice' is an action-comedy written and directed by Rawson Marshall Thurber. The movie boasts an ensemble cast, including Dwayne Johnson and Ryan Reynolds, and is expected to release in 2021. Death on the Nile: More Than ‘Blink-and-Miss’, Let a Hercule Poirot Fan Tell You What Ali Fazal Is Doing in Gal Gadot’s Mystery Thriller (SPOILER ALERT)

Getting ready to head back to the Red Notice set💃🏻but prep looks a little different now..😳#staysafe pic.twitter.com/wTdy42rMH5

Gadot has also a slew of other projects in waiting, including the much-anticipated mystery-thriller 'Death on the Nile'.