Filmmaker Meghna Gulzar recently visited the Jamia Millia Islamia to conduct a recce for her film Sam Bahadur, based on the life of Field Marshal Sam Manekshaw, sources from the varsity said on Sunday. 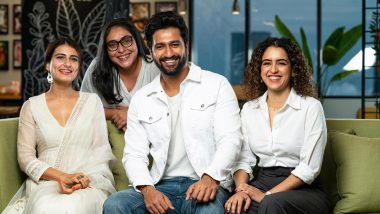 Filmmaker Meghna Gulzar recently visited the Jamia Millia Islamia to conduct a recce for her film Sam Bahadur, based on the life of Field Marshal Sam Manekshaw, sources from the varsity said on Sunday. According to a communication, in case the university is finalised as a location for the shoot, the filming will happen around October 10-15 for about a couple of days. Adivi Sesh: Done With Making the Film But Not Major Sandeep Unnikrishnan’s Spirit.

The biopic features Vicky Kaushal in the titular role along with actors Sanya Malhotra and Fatima Sana Shaikh. According to officials, the team surveyed a building when there were no students there. Elon Musk on Johnny Depp vs Amber Heard Defamation Trial: I Hope They Both Move On.

Around January-February, the varsity had also played host to the unit of Karan Johar's ‘Rocky aur Rani Ki Prem Kahani' which has Ranveer Singh and Alia Bhatt in lead roles. Johar and Bhatt were present in the varsity and the shooting had happened near its library. "The ad shoots keep happening off and on while film shoots mostly happen in winter months or when the temperature is pleasant. During the pandemic, many web series and ad films were shot here.

The Married Woman, a web series, was also shot here earlier. Another web series Feels Like Home, directed by Sahir Raza, who also made the Married Woman, was shot here in October last year," said sources privy to the development. Last October, students had condemned the varsity's decision to rent out campus space for film and ad shoots but keeping it closed for students.

The university has still not opened fully with classes happening only for final year students. However, an AISA actvist said, "Film shoots are currently not happening on the campus. As for reopening of the university, we have been given an assurance by the varsity authorities that it will fully reopen from July 17."

An official from the university said that Gulzar had come for a recce, but they have not heard anything from her since. The university charges Rs 1 lakh for a day's shoot, sources said. Before the pandemic, films like Panga and Doordarshan were shot in the university.