Adivi Sesh: Done With Making the Film But Not Major Sandeep Unnikrishnan's Spirit

As Major, a biopic on the 2008 Mumbai terror attack martyr Major Sandeep Unnikrishnan, nears its release the lead star of the film Adivi Sesh says working on the project has changed him as a person. 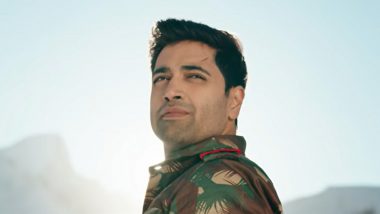 As Major, a biopic on the 2008 Mumbai terror attack martyr Major Sandeep Unnikrishnan, nears its release the lead star of the film Adivi Sesh says working on the project has changed him as a person. The 37-year-old actor-writer, who lived with the idea of making the movie for 10 years before it finally went on floors in 2019, said the work on the film may be complete but Major Unnikrishnan's spirit will stay with him forever. Bhool Bhulaiyaa 2 Star Kartik Aaryan Says 'Amije Tomar' Is Most Difficult Song He Has Shot.

“I don't think I will be done (with ‘Major') because I am having conversations around this that I have never had before. I am still not done with ‘Major' in the sense that I am not done with him (Major Unnikrishnan). "I am done making the film, I am not done with his spirit and I never will be. He has changed me as a person and made me so much less selfish,” Sesh told PTI in an interview. The Handmaid's Tale: Alexis Bledel Steps Away From the Hulu Drama Ahead of Season 5.

Shot across 75 locations in 120 days in Telugu and Hindi, “Major” is directed by Sashi Kiran Tikka of “Goodachari” fame and traces the life story of Major Unnikrishnan from his childhood to the 26/11 Mumbai attack. Sesh has also penned the film and throughout the process, the actor-writer said the pursuit was to deliver an entertaining watch. “It was about making an absolutely entertaining film. The whole purpose of doing this is to keep Major Sandeep's memory alive long. We are more healed today than we are from 2009, the year after (he died).

The near and dear ones feel it even today so it is important that this film be absolutely engaging and entertaining for the audience,” he added. Writing “Major” was a tedious process for Sesh as he had to select some of the most "cinematic and dramatic" moments from the martyr's life. “We were shocked to learn that his life was so much more cinematic and dramatic, than we had imagined. We were on the opposite (side) and we had to figure out which thing to cut out and let go."

The film marks Sesh's third project with the double duty as an actor and a writer following mystery-thriller “Kshanam” (2016) and action-spy thriller “Goodachari” (2018). The actor said he never had plans to pursue film writing but lack of opportunities early on in his career motivated him to consider it.

“I do not come from a film background and nobody was giving me an opportunity when I started. I decided nobody is going to give me a gig, so might as well write myself one.

"It started with that sort of a necessity and the idea of going to the producers and saying that ‘we will make a film based on the budget of a song'. That's how my career started," the Hyderabad-born actor said. Also starring Sobhita Dhulipala, Saiee Manjrekar, Prakash Raj, Revathi and Murali Sharma in pivotal roles, “Major” is produced by Sony Pictures Films India in association with Mahesh Babu's GMB Entertainment and A+S Movies. The film will be theatrically released on June 3. Next up for Sesh is the second chapter of action-thriller “HIT 2” (Telugu) and a film with “The Kashmir Files” producer Abhishek Agarwal, which will be made both in Hindi and Telugu.