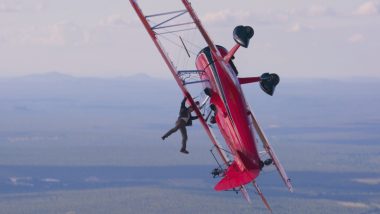 Hollywood star Tom Cruise's frequent collaborator and Mission: Impossible director Christopher McQuarrie marked the actor's 60th birthday on Sunday by sharing a new behind-the-scenes photo of him. According to Deadline, the BTS image seems to have been taken from the eighth MI movie, 'Mission: Impossible - Dead Reckoning - Part Two' as McQuarrie did not add any context to the photo. Tom Cruise Birthday Special: From Running in Shanghai to Climbing the Burj Khalifa, 7 Best Stunts of the Actor From the Mission Impossible Films!

It showed Cruise hanging off the wing of a mid-roll vintage red biplane, similar to the one seen in a pre-recorded message Cruise sent from the South Africa set of the film during CinemaCon in April. Cruise, who is known for constantly pushing the limits in his self-performed stunts, is currently flying high with Top Gun: Maverick which has grossed over USD 1.1B globally, reported Deadline. Mission Impossible – Dead Reckoning Part One Teaser: Tom Cruise’s Ethan Hunt Returns With a Stunning Globe-Trotting Action Extravaganza (Watch Video).

The actor spent his birthday on Sunday at the British Formula 1 Grand Prix, where he was supporting his pal and seven-time world champion Lewis Hamilton. "He's a great friend of mine. I hope he has a great day," Cruise told a news outlet on the starting grid. From Paramount Pictures and Skydance Media, Mission: Impossible - Dead Reckoning - Part One is set to release on July 14 next year with Part Two due on June 28, 2024, as per Deadline.