Tom Cruise Birthday Special: From Running in Shanghai to Climbing the Burj Khalifa, 7 Best Stunts of the Actor From the Mission Impossible Films!

With Cruise jumping off buildings and hanging on the side of planes as Ethan Hunt, he has created for some of the best set pieces in films ever as the character has become an icon of the action genre. 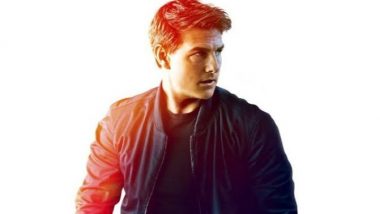 Tom Cruise is the last star of his kind. A man dedicated to bringing the most unfiltered, raw and breathtaking cinema experiences to the screen, Cruise has constantly wowed us with his stunts and passion for movies. No one does it like him. When you see a Tom Cruise film is going to hit the theatres, you know for a fact that you’re going to strapped in for the tensest two hours of your life. Top Gun Maverick Movie Review: Tom Cruise's Legacy Sequel is a Gripping, Emotional Spectacle That Honours the Original! (LatestLY Exclusive).

With Cruise’s most recent outing Top Gun: Maverick making history by garnering a billion dollars at the box office and providing for one of the best cinema experiences of all time, it just has us even more excited for what he has in store for Mission: Impossible – Dead Reckoning Part One.

Watch The Trailer For Mission: Impossible - Dead Reckoning Part One

The Mission: Impossible films have been Cruise’s most successful outings to date, as each film has topped the one that came before it. Cruise jumping off buildings and hanging on the side of planes as Ethan Hunt, he has created for some of the best set pieces in films ever as the character has become an icon of the action genre. With the actor hitting 60 (can’t believe he is 60 and pulls off stunts like nothing), let’s celebrate his birthday by taking a look at seven of his best stunts from the Mission: Impossible films.

Tom Cruise and running go hand-in-hand like bread and butter. The man can RUN. So, of course, it didn’t come off as a surprise when the best stunt in Mission: Impossible III was just him running and jumping off the rooftops of Shanghai. In a race against time, this is one of the best and most entertaining scenes of the film.

The halo jump from Mission: Impossible – Fallout was an experience that you have to just see in the theatre to have the full effect of it. The fact that it was shot practically with CG touch ups added for the lightning and weather, what you’re seeing Cruise do on screen is all real. It’s just one of those sequences that will stick with you.

For a scene in the fifth film, Cruise went above and beyond, and decided to hold his breath for six minutes underwater. To retrieve a drive so that Benji could make past the security protocols in time, this is a scene shot in one take and, will definitely have you at the edge of your seat.

Another Mission: Impossible, another sequence of Tom Cruise running. This time, we see him jump from the rooftops of London. Chasing Walker, this is a scene that’s backed by some great comedy and a tense chase that’s bolstered beautifully by Lorne Balfe’s soundtrack. Cruise was so dedicated to it that he famously broke his leg doing this scene too.

A chase that actually feels like a chase, the scene sees Cruise ride through the streets of Paris as an onslaught of police cars are on his tail. Seeing the city at its best as the golden hour takes over, it’s a masterclass in how action should be shot and how hard hitting it can get.

Hanging On the Side Of a Plane (Mission: Impossible – Rogue Nation)

Want to learn how to open a film? Well, the fifth Mission: Impossible is a masterclass in that. Seeing Ethan try to stop a plane but being too late to do it, what does he do? He jumps on the side of the plane and hangs on to dear life as it takes off. The fact that Cruise is actually suspended in the air only with harnesses holding him, this is one of the franchise’s most high-octane sequences.

The franchise’s most famous stunt yet, and one that revived it too, the Burj Khalifa sequence is Tom Cruise at his best. Trying to reach the 130th floor of the world’s tallest building, Cruise suspended himself out of the building and actually did the stunt. It’s even more crazy once you learn the backstory of it, but yes, this is Mission: Impossible doing what it does best. From Top Gun Maverick to Jurassic Park, 10 Best Films to Hit $1 Billion as Tom Cruise's Sequel Passes Milestone at Box Office.

With Top Gun: Maverick defying all expectations and making Cruise be the definitive action star, it just makes the hype for Mission: Impossible – Dead Reckoning Part One all the more higher. With him ruling the box office and bringing passions to all his projects, you can’t bruise the Cruise. With this, we finish off the list and wish him a very happy birthday.

(The above story first appeared on LatestLY on Jul 03, 2022 09:30 AM IST. For more news and updates on politics, world, sports, entertainment and lifestyle, log on to our website latestly.com).