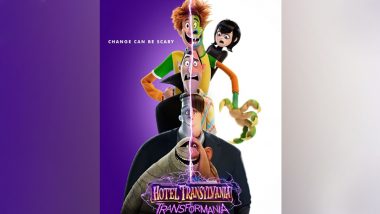 Sony Pictures Animation's upcoming movie, Hotel Transylvania: Transformania will be bypassing a theatrical run, instead opting to stream on Amazon Prime. According to The Hollywood Reporter, this decision to skip theatres and head to Prime Video with the CG-animated picture is understood to be in the early stages and could result in a deal valued at around USD 100 million. Snake Eyes: G.I. Joe Origins Full Movie in HD Leaked on Torrent Sites; Henry Golding and Samara Weaving's Movie Falls Prey to Piracy?.

The latest instalment of the 'Hotel Transylvania' franchise from creator Genndy Tartakovsky has an ensemble voice cast that includes Andy Samberg returning as Johnny, Selena Gomez, Kathryn Hahn, Jim Gaffigan, Steve Buscemi, Molly Shannon, David Spade and Keegan-Michael Key. In the movie, Dracula and the rest of the monsters embark on a brand-new adventure full of twists and turns. During the course of the story, a new invention created by Van Helsing transforms all the monsters into humans and Johnny into a monster, they must work together to switch back before the change becomes permanent. The Empire: Shabana Azmi Opens Up About Her Role in Disney+ Hotstar Show, Says ‘Always Wanted to Play a Historical Character’.

'Hotel Transylvania: Transformania' is set to be the latest major studio tentpole to launch on a streamer amid the ongoing fallout from the pandemic. With the box office back and running, this summer's theatrical release calendar is especially crowded when it comes to family fare and a Delta variant surge has put another headwind in the way of the major studios. The movie which was earlier supposed to release on July 23, will now be coming out on October 1, kicking off the Halloween season.