The Bombay High Court will resume hearing the bail application of Shah Rukh Khan's son Aryan Khan, others on Thursday who were arrested by the Narcotics Control Bureau (NCB) in the Mumbai cruise drugs case. 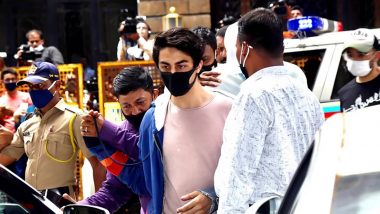 Mumbai, October 28: The Bombay High Court will resume hearing the bail application of Shah Rukh Khan's son Aryan Khan, others on Thursday who were arrested by the Narcotics Control Bureau (NCB) in the Mumbai cruise drugs case.

During arguments on Tuesday, former Attorney General Mukul Rohatgi argued that Aryan Khan was a "young man" who should be sent to rehab rather than jail.

The 23-year-old star son was arrested on October 3 after a drugs raid on a cruise ship party by Narcotics Control Bureau officers in disguise.

At present, Aryan is lodged at the Arthur Road Jail along with another accused Arbaaz Merchant. Whereas, Munmun Dhamecha is at Byculla women prison.

The hearing will resume on Thursday afternoon. Rohatgi, who appeared for Aryan Khan, told the court on Tuesday that his client was invited to the cruise as a special guest.

He told the court that there was "no case of possession of drugs" against Aryan Khan and that he was arrested wrongly. He also said "it was fit case for bail".

Rohatgi said the law provides a maximum of one year of imprisonment for small quantities of drugs.

"Law provides that for small quantities, the maximum punishment is one year of imprisonment. For consumption, there is rehabilitation as per law," Rohatgi argued on behalf of Aryan Khan.

"Aryan Khan was invited by one Pratik Gaba. He was like an organiser. He invited accused 1 Aryan and accused 2 Arbaz Merchant. Both were invited by the same person. They both landed up together at the cruise terminal," Rohtagi said.

"It appears that NCB had some prior information that people on this cruise were having drugs so they were present in a certain strength. My client, Arbaz and many others were apprehended. A search was conducted and nothing was recovered from the accused 1 (Aryan Khan). No medical at any point was conducted to ascertain if he has taken any drug," he added.Rohatgi said six grams of charas was recovered from accused number 2 (Arbaz Merchant) and Aryan had no relation with him except for arriving with him there.

"Many others were found with some amount of drugs so they allege that there was a general conspiracy. They are not charging me with consumption or possession but with conspiracy and conspiracy not with Arbaz but others," the former AG argued on behalf of Aryan Khan in the courtroom arguing before Justice Nitin Sambre.

Aryan Khan was arrested on October 3. An NCB team busted an alleged drugs party on the Cordelia Cruise ship which was on its way to Goa at mid-sea on October 2. A total of 20 people, including two Nigerian nationals, have been arrested so far in the case.

Aryan Khan's bail plea was rejected by the special court on October 20 in the case following which his judicial custody in the matter got extended till October 30. Khan approached the Bombay High Court for an urgent bail hearing.