On the previous hearings, the HC asked for the state files on the three notifications under challenge and realised that the decision to prohibit unvaccinated people from travelling in local trains had been taken unilaterally by the then chief secretary Sitaram Kunte. 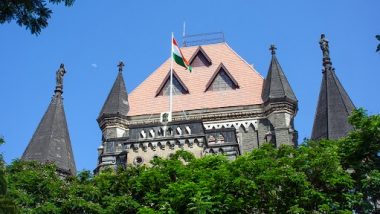 Mumbai, February 21: The Bombay High Court on Monday asked the Maharashtra government if it was willing to withdraw its notification issued last year prohibiting people not vaccinated against COVID-19 from travelling in local trains in the city.

"Let bygones be bygones. Let there be a new beginning," Chief Justice Dipankar Datta said, adding that Chief Secretary Debashish Chakraborty must inform the court on Tuesday if the state government will withdraw its decision to permit only fully vaccinated people to travel in the suburban trains.

A bench of Chief Justice Datta and Justice M S Karnik was hearing two public interest litigations seeking that all people in the Mumbai Metropolitan Region (MMR) be allowed to travel in local trains, irrespective of their vaccination status. India Reports 16,051 New COVID-19 Cases, 206 Deaths in Past 24 Hours; Recovery Rate at 98.33%.

The PILs challenged three notifications issued by the Maharashtra government in July and August last year that prohibited unvaccinated people from travelling in local trains, which are considered as the lifeline of Mumbai.

Niles Ojha, the counsel for one of the petitioners, had earlier argued in the HC that the prohibition on use of local trains by unvaccinated people was illegal, arbitrary, and in breach of the citizens' fundamental right to move freely across the country, as guaranteed by Article 19 (1) (d) of the Constitution.

He had argued that the government's move discriminated between the vaccinated and unvaccinated people, though neither the Centre nor the Maharashtra government had made vaccination mandatory.

On the previous hearings, the HC asked for the state files on the three notifications under challenge and realised that the decision to prohibit unvaccinated people from travelling in local trains had been taken unilaterally by the then chief secretary Sitaram Kunte.

The high court on Monday said, "Chief Secretary has to withdraw order (the notification on such prohibition). Whatever has been done by his predecessor (Kunte) is not in accordance with law." "Withdraw this and allow people. Now, the COVID-19 situation has improved. Maharashtra handled it beautifully. Why are you inviting a bad name?" the court said.

The state must be sensible and not treat the issue as an adversarial litigation, the court said and sought the chief secretary's response by Tuesday afternoon.