Residents of Kuliahata village in East Midnapore are now using small handmade water rafts to commute from their houses to the district centre to buy basic necessities. 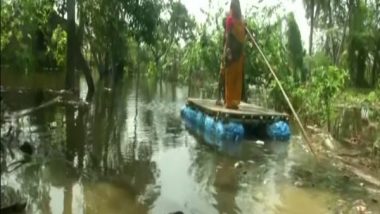 Midnapore East, May 29: Normal life has been affected in many villages of East Midnapore district in West Bengal after floodwaters entered the houses in the wake of Cyclone Yaas. Residents of Kuliahata village in East Midnapore are now using small handmade water rafts to commute from their houses to the district centre to buy basic necessities.

According to Jyotshna Maity, a resident of Kuliahata, whose father-in-law has a Kidney ailment and need regular dialysis, the living conditions are very unhygienic, and the commute to the hospital is very problematic. Cyclone Yaas Aftermath: Cyclonic Storm Batters Bengal, Odisha; Rescue, Restoration Work Underway.

"Following the Cyclone, there is a flood-like situation in several villages of East Midnapore. Kuliahata under Talgachria two is the completely submerged underwater. There is a rotten smell which is creating fear among the villagers about the possibility of other infections," she said.

"We have only water rafts to get to our houses because the whole of the lowland area is underwater. My father-in-law is a dialysis patient and it's very problematic for me to take him to the hospital. Using this raft we are managing to move out of the house as everything else is underwater, even the furniture," Maity added.

Another resident Gautam told ANI that staying in such a condition is problemc for villagers, but they do not have a choice. "We shifted to the shelters when the cyclone made landfall. After returning we saw that nothing was left. So we made small rafts. Now at least we can enter our houses to collect things. Staying in this situation is very problematic but there are no options," said Gautam.

West Bengal Chief Minister Mamata Banerjee has said that 10 million people were affected by the cyclone in the state and 3 lakh houses were damaged.