Sources in the Kolkata Traffic Police said the squall, which started on Wednesday evening, left parts of Central Avenue, MG Road, Bidhan Sarani and Ultadanga heavily waterlogged for at least a few hours, inconveniencing workers undertaking relief work in the wake of the May 20 cyclone. 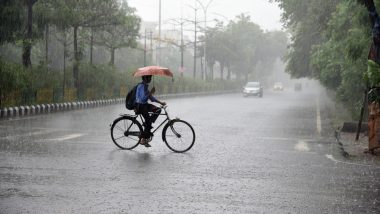 New Delhi, May 28: The intense heat wave that gripped parts of north India relented on Thursday with light and sporadic showers in Punjab, Haryana and Delhi, while Rajasthan saw a slight dip in temperatures after the mercury neared the 50-degrees mark a day earlier.

Weather departments in these regions have forecast thunderstorm and light rains in the next 24 hours, with the India Meteorological Department (IMD) forecasting that heat wave prevailing over plains of northwest and central India will likely further abate from Friday. Also Read | 2020 Datsun Redi-GO Facelift BS6 Launched; Price in India Starts at Rs 2.83 Lakh.

Cloudy weather and sporadic rain gave the national capital much-needed relief from heat wave. The mercury dropped several notches during the day and further in the evening as strong winds swept across the city and many areas witnessed light rain. Also Read | Amarnath Yatra 2020 Likely to be Conducted For 15 Days Via Baltal Route Amid Coronavirus Pandemic: Reports.

The Safdarjung Observatory, which provides representative figures for the city, recorded a maximum of 40.3 degrees Celsius, normal for this time of the year. On Tuesday, it recorded a high of 46 degrees Celsius -- equalling an 18-year-old record for May.

Kuldeep Srivastava, the head of the regional forecasting centre of the India Meteorological Department (IMD), said a fresh western disturbance and easterly winds at lower levels caused the change in the weather. Dust storm and thunder storm with winds gusting up to 60 kilometers per hour is likely over Delhi-NCR on May 29-30," he said.

In small areas, like the national capital, heat wave is declared if the temperature soars to 45 degrees Celsius even for a day, according to the IMD. Uttar Pradesh's Bundelkhand region experienced torrid weather conditions with Banda recording 44.6 degrees Celsius and Jhansi 44.2 degrees Celsius. State capital Lucknow got a little respite from the blistering heat and recorded 35.6 degrees Celsius, the MeT office said.

Rain, thunderstorm and also dust storm have been forecast at certain places in Uttar Pradesh during the next 24 hours. Rajasthan's Churu and Sriganganagar districts recorded 46.9 degrees Celsius. The temperature in Churu hovered around the 50-degrees mark for the past two days.

Light rain at isolated places and gusty winds on Thursday brought slight relief from the scorching heat in Punjab and Haryana as maximum temperatures settled below the 40-degree mark at many places. Chandigarh, the common capital of the two states, which received light shower, recorded a maximum temperature of 37.5 degrees Celsius, one notch below normal limits, the meteorological department said here.

Punjab's Amritsar, Ludhiana and Patiala recorded below-normal maximum temperatures of 38.8 degrees Celsius, 38.7 degrees Celsius and 37.9 degrees Celsius respectively. The weatherman has forecast light to moderate rain and thundershowers at many places on May 29 and 30, and thereafter at isolated places in the state.

In Kerala, the government has warned fishermen not to put out to sea from midnight tonight and prohibited fishing activities in view of the possible formation of a low pressure area over South East and adjoining Arabian Sea. The South West Monsoon is expected to hit Kerala on June 1, with a cyclonic circulation over the Bay of Bengal, according to the IMD.

As per the IMD bulletin at 5 PM, there was a possibility of the formation of the low pressure area from May 31-June 4 and the conditions were likely to become favourable for the onset of the South West Monsoon on June 1 in Kerala. In the east, an overnight downpour, coupled with gusty winds, claimed at least two lives and dealt a fresh blow to the city and other south Bengal districts on Thursday, a week after Cyclone Amphan battered the state, leaving behind a trail of destruction.

In North 24 Parganas, a 40-year-old man was killed and five others were injured after a brick wall collapsed on them, police said. One person died in a lightning strike at Durgapur in West Burdwan district, a disaster management department official said.

Sources in the Kolkata Traffic Police said the squall, which started on Wednesday evening, left parts of Central Avenue, MG Road, Bidhan Sarani and Ultadanga heavily waterlogged for at least a few hours, inconveniencing workers undertaking relief work in the wake of the May 20 cyclone.

In Howrah, several areas including Panchanantala Road, Shibpur, and Mandirtala remained inundated, with just a few shops lifting shutters during the day.

Official sources said the heavy rain, preceded by the Nor'wester, has also disrupted life in Nadia, Hooghly, North and South 24 Parganas, East and West Midnapore districts, which are already under severe strain for the past eight days due to the cyclone.