Flooding and or water logging in low lying areas, disruption of surface transport, landslides, water pooling are also expected in the affected areas, added the IMD. 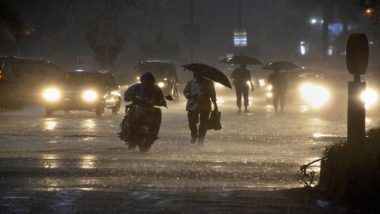 Mumbai, October 15: The India Meteorological Department (IMD) on Thursday issued a rainfall and strong wind warning over Maharashtra for today and tomorrow. It also said that there can be damage to crops and disruption of daily activities in the affected areas.

"Strong wind speed reaching 20-30 kmph gusting to 40 kmph is very likely to prevail around the system centre and over Madhya Maharashtra during the next 12 hours and gradually decrease thereafter," predicted the IMD.

It further stated, "Due to well-marked low pressure area over Maharashtra, light to moderate rainfall at most places with heavy to very heavy rain at isolated places would occur over Konkan and Goa and adjoining Ghats of Maharashtra and heavy falls at isolated places over coastal south Gujarat today." Also Read | BMW 2 Series Gran Coupe Launching Today in India; Watch LIVE Streaming of BMW's Most Affordable Car Launch Event.

It is very likely to move west-northwestwards and emerge into east-central Arabian Sea off Maharashtra coast and concentrate into a Depression over east-central and adjoining northeast Arabian Sea off Maharashtra - south Gujarat coasts during next 48 hours, said the IMD, adding, "It is very likely to move gradually west-northwestwards and intensify further."

This can cause damage to paddy crops, banana, papaya trees, drumstick trees and horticultural crops. Flooding and or water logging in low lying areas, disruption of surface transport, landslides, water pooling are also expected in the affected areas, added the IMD.