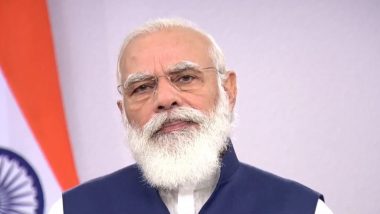 New Delhi, October 17: Prime Minister Narendra Modi will address the centenary convocation of the University of Mysore via video-conferencing on Monday.

A statement issued by the Prime Minister's Office (PMO) on Saturday said the Karnataka governor, along with other dignitaries, would be present on the occasion with members of the syndicate and the academic council, MPs, MLAs, MLCs, statutory officers, district officers and students and parents set to witness the ceremony online. Also Read | Ravi Shankar Prasad Escapes Unhurt After Blades of Union Minister’s Helicopter Broke at Patna Airport: Reports.

The University of Mysore was established in 1916. It was the sixth university in the country and the first in Karnataka.