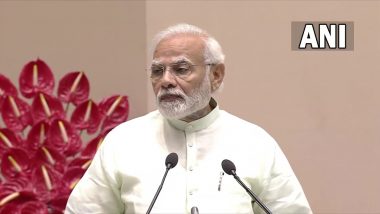 New Delhi, June 6: Prime Minister Narendra Modi on Monday launched the national portal for credit-linked government schemes - Jan Samarth Portal. Prime Minister participated in the 'Iconic Week Celebrations' of the Ministry of Finance and the Ministry of Corporate Affairs on Monday at Vigyan Bhawan, New Delhi. The week (June 6-11) is being celebrated as part of the 'Azadi Ka Amrit Mahotsav' (AKAM).

According to Prime Minister's Office (PMO), Jan Samarth Portal is a one-stop digital portal linking government credit schemes. It is a first of its kind platform which directly connects beneficiaries to lenders. The main purpose of the portal is to encourage inclusive growth and development of various sectors by guiding and providing them with the right type of government benefits through simple and easy digital processes. The portal ensures end-to-end coverage of all the linked schemes.

The Prime Minister also inaugurated a Digital Exhibition which traces the journey of the two Ministries over the past eight years. Prime Minister also released special series of Rs 1, Rs 2, Rs 5, Rs 10 and Rs 20 coins. These special series of coins will have the theme of the logo of AKAM and will also be easily identifiable to visually impaired persons. PM Narendra Modi Virtually Launches ‘LiFE MOVEMENT’, Microsoft’s Co-Founder Bill Gates Attends the Launch of Global Initiative.

The programme has been organised simultaneously at 75 locations across the country and each location was connected through virtual mode with the main venue.