According to sources, Rajnath also spoke to Leader of the Opposition in Rajya Sabha Mallikarjun Kharge and Samajwadi Party chief Akhilesh Yadav earlier today and sought their opinion on candidates for the July 18 presidential elections. 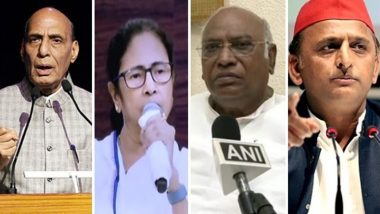 New Delhi, June 15: Union Minister Rajnath Singh has spoken to Trinamool Congress supremo Mamata Banerjee among other opposition leaders for the upcoming presidential election even as Opposition parties today after a meeting convened by the West Bengal chief minister announced that they will put up a consensus candidate.

According to sources, Rajnath also spoke to Leader of the Opposition in Rajya Sabha Mallikarjun Kharge and Samajwadi Party chief Akhilesh Yadav earlier today and sought their opinion on candidates for the July 18 presidential elections.

However, the three leaders have asked the government to declare the BJP-led NDA's nominees for the Presidential election. Congress's Mallikarjun Kharge, meanwhile said that he has asked by party chief Sonia Gandhi to speak to other party leaders to arrive at a consensus on a joint candidate. Presidential Elections 2022: Opposition Decide to Field 'Common Candidate' for Upcoming July 18 Presidential Poll, No Name Decided Yet.

"Congress will play a constructive role in ensuring that a consensus is reached over candidate's name. Let's be proactive, not reactive. Congress has no particular candidate in mind, will sit with others to arrive at a name acceptable to all," Kharge said.

Leaders of 17 political parties joined a crucial meeting of opposition parties convened by Mamata Banerjee to build consensus on fielding a joint candidate against the NDA in the presidential election here.

"Several parties were here today. We've decided we will choose only one consensus candidate. Everybody will give this candidate our support. We will consult with others. This is a good beginning. We sat together after several months, and we will do it again," TMC leader Mamata Banerjee said after the meeting.

CPI MP Binoy Viswam who participated in the meeting said that Mamta Banarjee had proposed NCP's Sharad Pawar's name as the Presidential candidate of the Opposition. Pawar did not accept that proposal.

The Telangana Rashtra Samithi (TRS) led by Telangana Chief Minister K Chandrashekhar Rao did not send a representative to the meeting. The presidential election is slated to be held on July 18 and votes will be counted on July 21.